I made a Black Hack version of the Galli as a character class as Fiona presented them in her blog post about why she hate clerics.

They are priestesses who sometimes practice sacred prostitution. It is not the first time that I see a character built around sacred sex work in OSR publications. This is a subject that can easily be problematic but I guess that it can also be used in a mature and respectful way. In the case of the Galli, this is again associating trans characters with sex work, but at the same time sex work is a part of the history of trans people and sex workers are also part of our community, I don't think that they should be erased. I played Satareh, a houri custom character class (a sacred prostitute) up to level 4 in the Ultan's Door campaign and I really appreciated this character, her role as a sex worker did not really come up during play, as our adventuring mostly happened outside the city but playing her made me think about how sex work could be handled in play.

Some guidelines to handle sex worker characters in a campaign:

GALLI as character class (by Fiona)


Who are they: castrated individuals[1] who dress in luxurious robes, attractive headgear (crowns, laurel wreathes, or Phrygian caps) and excessive makeup. Their hair is long and their features feminine. They have knives, bronze shields, and tympanum and dance ecstatically. They are preceded by frenzied music and wafts of heady incense. They bear a representation of their goddess atop a donkey. They perform for money. Because of the edict against castration of a citizen, they are drawn from the ranks of low born and foreigners. Sometimes they practice sacred prostitution. The object of equal measures of scorn and religious awe.
Why are they: they wander around and perform blessings (a shield dance over newborns, blessing crops to be fertile as Attis represents the life-death-rebirth cycle of crops) and tell fortunes. The actual operations of the cult are opaque (it is, after all, a mystery cult).
Domains: the boundary between life and death, the wild (particularly birds of prey and lions), frenzied dancing, mountains and stones in general. In chthonic ritual practice can contact an ancient race of smiths/magicians who can work metal, teach the secrets of mathematics and literacy and bestow magic; they will also witness oaths and bind them.
How is one initiated: the only requirement is the devotion necessary to castrate oneself in a fit of divine madness during the 'Day of Blood' (March 24) in symbolic mourning for the temporary death of Attis. Then you become a mendicant priest and perform for the glory of Attis & Cybele.

[1] Galli are in various sources referred to with masculine pronouns, feminine pronouns and 3rd gender pronouns sometimes pegged to if they have castrated themselves.

Once by day they can:

Once by divine favor they can:
Ways of winning divine favors
(You can accumulate one favor by level)

LEVELING UP
Roll to see if attributes increase, roll twice for WIS and CHA. 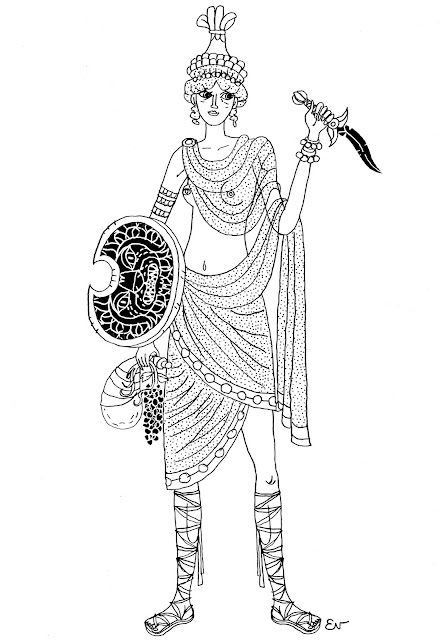