Thanks to everyone who have participated!


I have uploaded the print version on LULU:
http://www.lulu.com/shop/cedric-plante/spinetooth-oasis/paperback/product-23261181.html

Also the link to the free PDF version:
https://drive.google.com/file/d/0B_ogKTnp49LkczN5UjVGMDNyUWc/view?usp=sharing 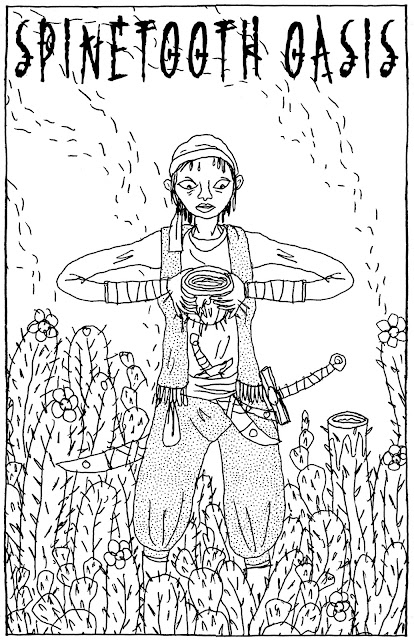 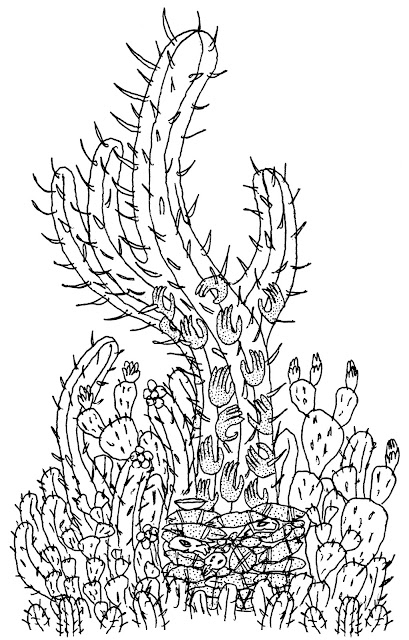 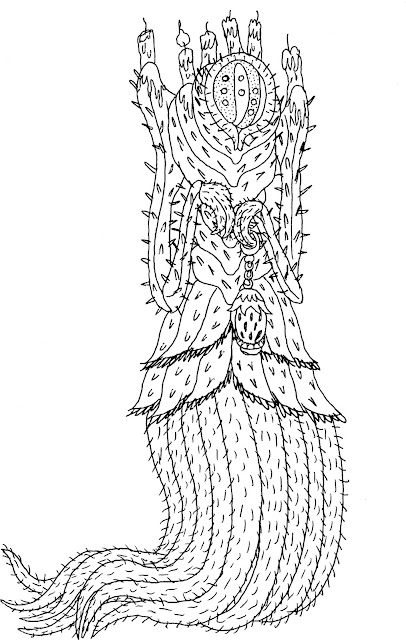 Beetle-men and their Rolling Castles

Cedric P
Ok what about these beetle men? I need some quirky detail to start drawing.

Ray O
They have intricate and varied nose-horns that curve up like a rhinoceros beetle. Also, they are artificers and alchemists. So they have gadgets and/or bandoliers of potions.

Benjamin B
They don't use belts or pouches - they use shell-weld resin to stick things directly to their exoskeletons. 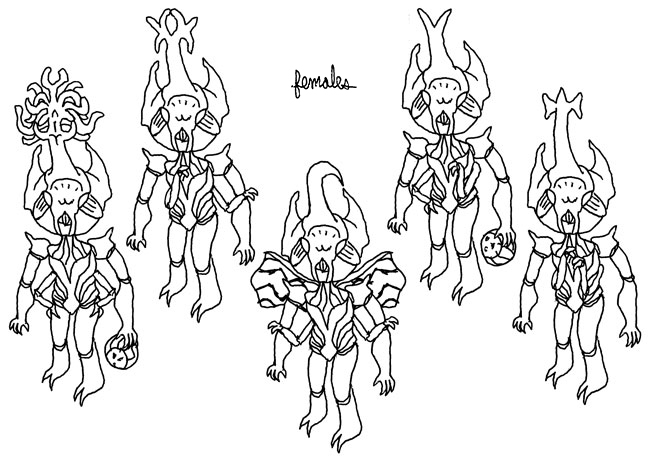 Vincent Q
Is there a ruling caste of powerful Dung Beetle ruling them from their rolling Dung Castle?

Ray O
The females are powerful and bulky. Makes are slender, subservient accountant types. They wield a lot of power as the logistical backbone of the beetle empire while the women are out making war.

Benjamin B
The alchemist cast have complex jaws and weird glands. They chew weird ingredients, combine them with secretions and glandular juices, and regurgitate the resulting fluids into beautifully crafted jeweled flasks. These potions are among the most prized and the trade in them is the core of the beetle folk economy. 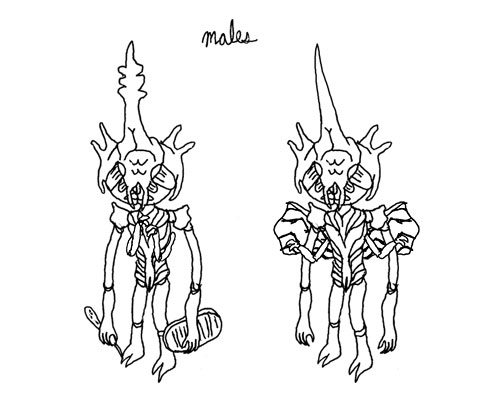 Cedric P
it must be a pain to live in a rolling castle.

Ray O
All the rooms are round and sit inside a thin layer of fluid, so they revolve/remain upright even as the ball rolls. However, they must sometimes wait on one of the radial tunnels to line up with their room's doors in order to ingress or egress. Moving from the outside of the castle to the throne room is a lengthy process that requires the whole castle to be rolled in very precise directions in a very precise sequence.

Benjamin B
First dungeon where you must tract vector and velocity for when navigating it's Chambers.

Cedric P
The ball must roll very slowly. I imagine they use giant beetles mounts to roll the castle. 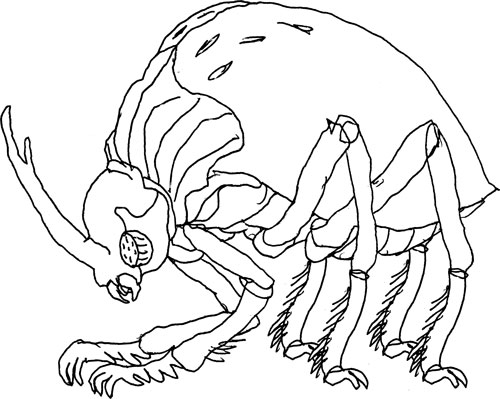 Ray O
Those grooves create rings like tree rings. That is, they change as the castle grows in size or when a new ideology takes over and consciously changes the pattern, so that you can point to older grooves and talk about what happened during that period.

Benjamin B
it'll show up in idiom and common sayings. "You're running in a narrow groove!" to indicate somebody has reactionary thinking.

Ray O
"You do your groove and I'll do mine."
"We've all seen that groove before!"
"Why can't things be like they were in the old grooves?"
"Everyone is moving to a different groove these days."

Benjamin B
Learning the history of the bugfolk is tricky, because they reckon time in circuits of the palace groove, but as the groove widens each circuit takes longer in a dead reckoning of time.

Ray O
Truth. I wonder if they ever revisit an old groove for a significant period of time, further confusing the timeline. "During the 237th circuit of the third navigation of the groove of St. Grakulon the Wise..."

Benjamin B
The interior heavily-grooved regions of their nation is called the Rutlands. The smallest grooves have weathered into gentle undulations in the land, while the more recent grooves are still sharp. 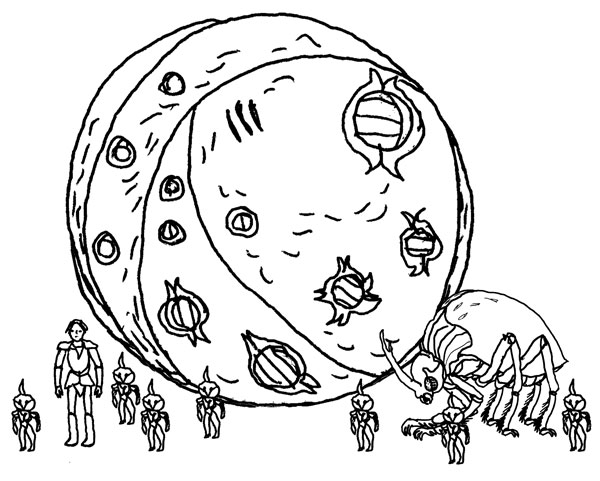 We did some collaborative creatures creation on G+:

Benjamin B
Mind-control snails that perch on the craniums of different host species and control them.

Cedric P
they suck the brain into their shell?

Benjamin B
A harpoon-like tooth full of venom paralyzes their 'host' and allows the snail to get comfortably anchored. It bores a hole in the skull with radula and acid and extends its proboscis into the skull and hook into spinal nerves for controlling the body. I imagine them being cheerful and cute, with little eyestalks and everything. 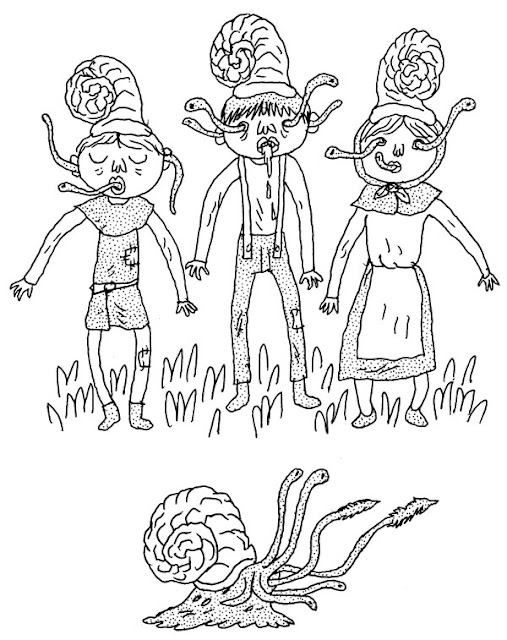 Vincent Q
I'm picturing a snail with a skull in place of shell.

Benjamin B
I like how they could almost be mistaken for jaunty hats.

Ray O
That's awesome. What if these are children. The snails can only drill through skulls that haven't hardened into full adulthood.

Cedric P
And you are stuck with a snail kid. Since they don't erase their personality, they just fuse with it. Farmers won't kill their kids just because they have merged with a snail. I mean if they can still work on the farm, there still good. Times are hard, you need all the hands you can get.

Benjamin B
Maybe different sub-species of snails are especially good at different things, making them attractive options for 'partnership' in some communities. A snail that grants a superior sense of smell, letting snail children to scent valuable truffles, for example. A snail mage can concentrate on two spells at once. The heavy spiked shells of the war-snail serves admirably as a great helm.

Ray O
Oooh. I could see a weird detail of a village where it's generally abhorrent to imagine having a snail child ... it's a 'tragedy' in other words ... but one farmer has done it one purpose to 'make' a truffle hunter kid. So everyone kind of looks down on that farmer, maybe even you, but you need info from him.

Cedric P
Yeah it need to remain a tragedy. But you have to compose with it when it happen. That farmer who voluntary contamine his child is a greedy bastard.