I added keying numbers to the Cozy Land map.

I would like to try to write descriptions for all of them to do a mostly non-violent problems solving campaign.
Keyed version: https://drive.google.com/drive/folders/1mP2WDJzhEp1tMIoWyPFAoAN5kD9QJVXo?usp=sharing
Get the giant plushy print: https://gumroad.com/l/kvhJW
Posted by Evlyn at 1:07 PM 2 comments:

My collection of maps

I assembled all my maps into a collection on Artstation, I was surprised by how many I drew.

I have to admit that I did that because sometime I feel like my map work is a bit under appreciated/celebrated. Probably simply because I am a bit shy and that my anxiety make it difficult for me to participate to big projects and events (like cons).

(Note that you can open most of these projects to reveal additional maps.)

Email ThisBlogThis!Share to TwitterShare to FacebookShare to Pinterest
Labels: map

(I decided their gender identities and sexual orientation on my own)

(That generator is fun but it need more work) 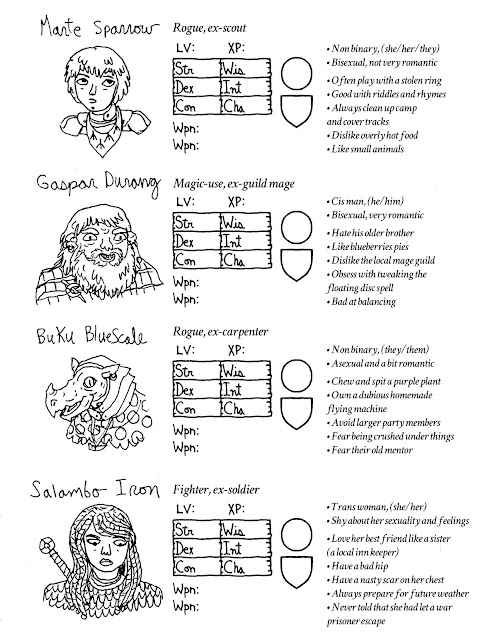 I am taking commissions for monsters!!


I am taking commissions for monsters!!
Write me at evlyn.moreau@gmail.com or direct message me on Patreon.
If you order something remind me that your support me on Patreon and I will add a little extra. 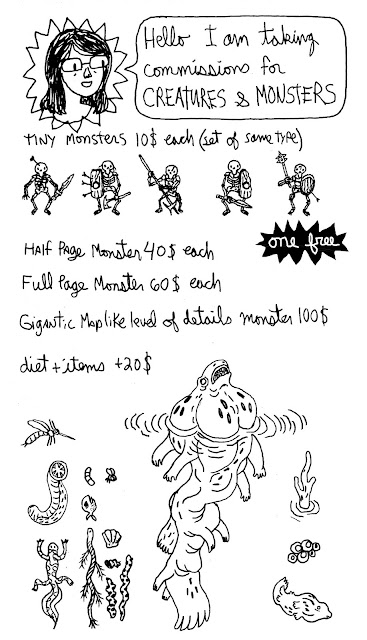 The Good Friends of Jackson Elias podcast discussed how folklore can be used to present varied and often contradictory interpretations of creatures. We often apply this to monsters and mythos entities but I thought that it could be interesting to apply this to the player characters' professions, like how The Witcher and The Mandalorian depict common folks as having all kinds of stories and rumors about their professions, some trues and some false, sometime these rumors profit the characters but sometime they also complicate their live.

If you don't want these rumors to apply to all fighters, cleric and magic-users, make them about a specific character guild.

When the characters explore a new location or region, modify one of their answers to create a local variant.

I spookyfied the OSE (Old School Essentials) Level 1 random table using some Halloween keywords.
I rolled an Halloween flavor for each entries and I mixed the results to create Halloween themed variants of these level 1 encounters.
Halloween flavors table (d12)
LEVEL 1 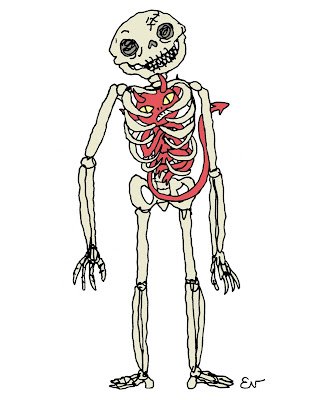 There is a short review and actual play of my zine The Kobolds Art Exhibition on the Seed of Worlds blog.

Reading actual plays of my zines is still the best thing in the world, I missed that kind of interacting. :)

Sadly because of the LULU big update my zines are all currently out of print. I am thinking of moving to DriveThruRPG even if it is not ideal. I guess that it will take me some time to regroup all the files and the covers and to upload everything. I will post an update here once this is done.

As for the kobolds capacity to survives dangerous environments, I wonder if they could weaponize their magical paintings...

If the kobolds migrate to one of your dungeons, let me know about it. Especially if your group dares to venture into one of their paintings. 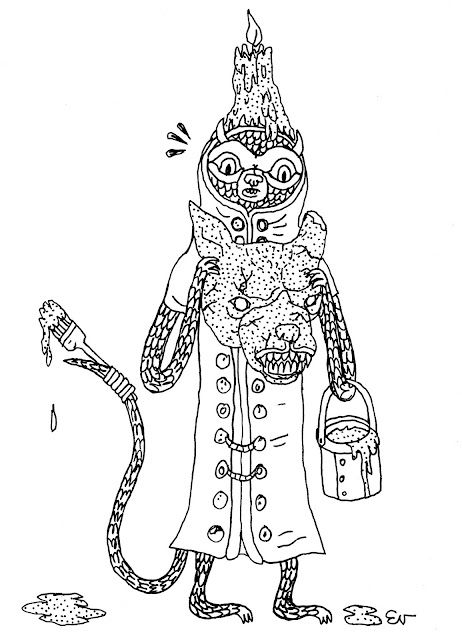 I contributed 3 illustrations to the fourth issue of Skeleton Wizard. 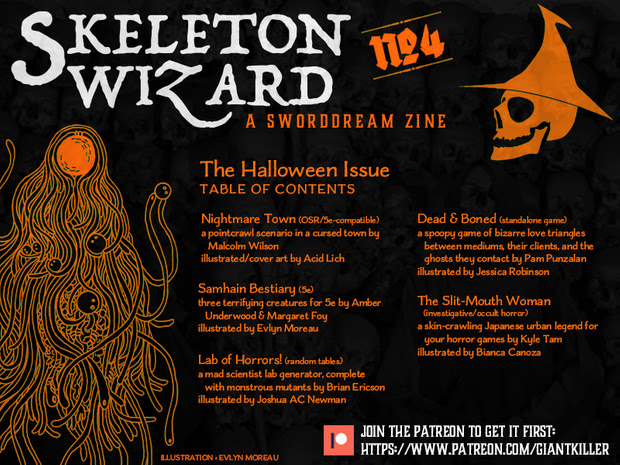 News from my Orbital Megastructure project.

If I don't post here often is because I am working hard on Orbital Megastructure, my sci-fi game "powered" by Macchiato Monsters. 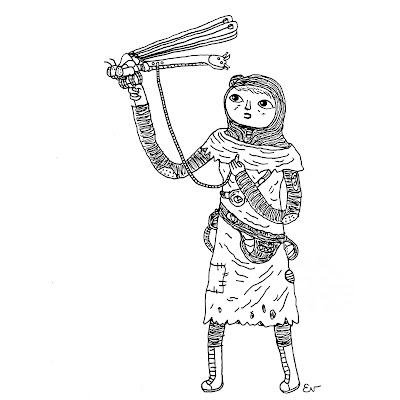 Here is the list of content, I have written a big paragraph or a random table for each entry.
And I am plastesting two times a week! 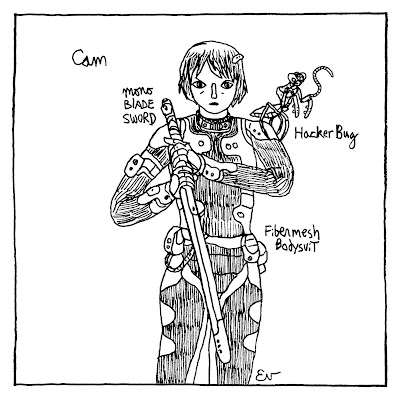