Moon Fish Mage learn their spells from their moon fish familiar.
There spheres of influences are water and moonlight.
They can learn other spells from other sources but it take them the double of the time to learn them.
They have good relationship with mermaids and moon related creatures. 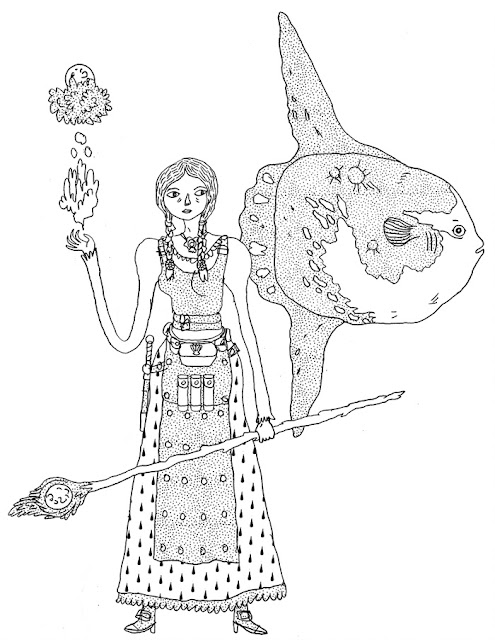 Piercer Pixies are bad spirits that travel with great beasts. They are very nasty with they gather in swarms. Killing them is often a good way to get the attention of those great beasts. 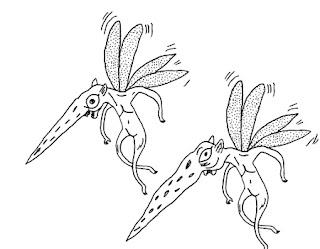 Moose Ogres happen when you bury the remains of a moose with those of a ogre. They are angry spirits, they hate mooses and ogres and eat human flesh. Don't do this. Mooses don't like this and even ogres will tell you to be careful with this. Only a vengeful and desperate ogre will deliberately create a Moose Ogre. The only way to appease the cursed moose spirit that animate the Moose Ogre is to kill it to separate the mooses bones from the ogres ones and to bury them separately. Ogres are even willing to team up with humans to hunt down Moose Ogres (but they wont care about appeasing the moose spirit). 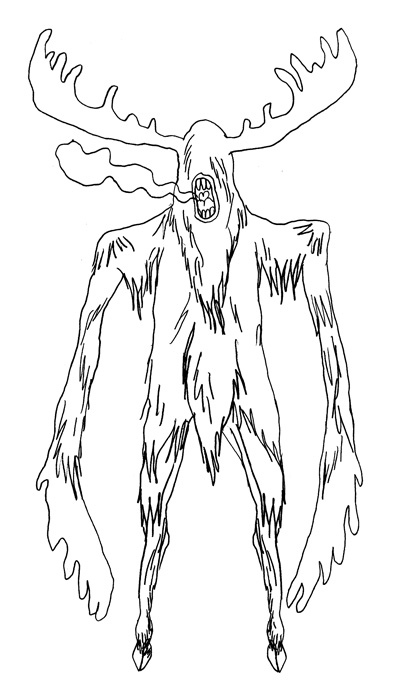 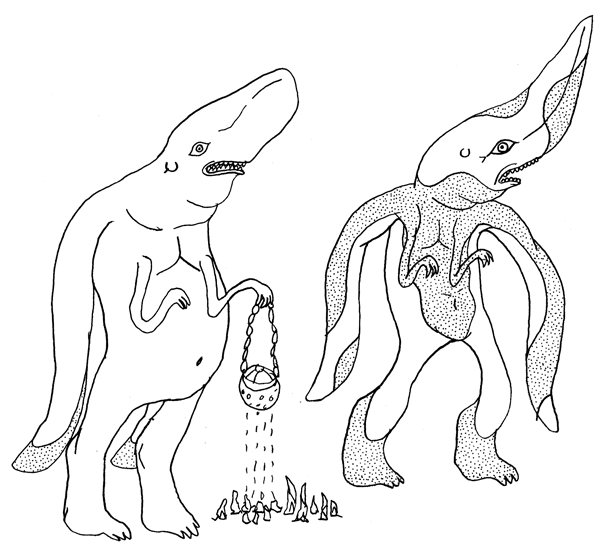 Cleric of the Vibrating Cup turning a golem assassin 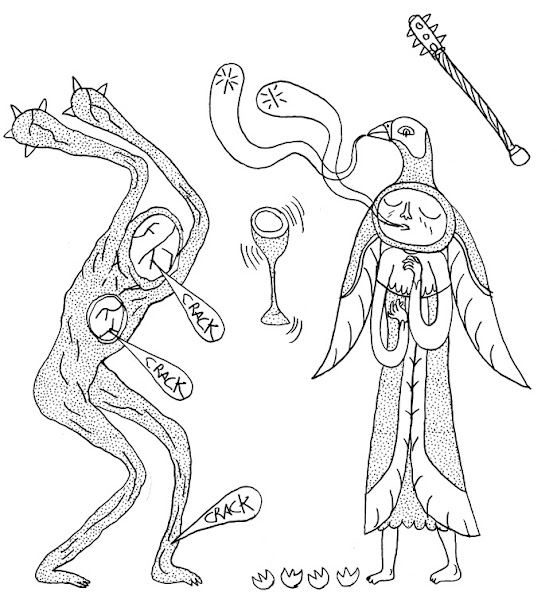 A man who was once able to walk between worlds have lost everything. After a long voyage, back in his homeland, he tried to meditate to feel again the touch of the other worlds. But he only felt emptiness... Lost in his meditation he became a portal to the hollow world. Now he generate hollow matter and hollow goblins who play with hollow yoyos and who cause a lot of problems by absorbing stuff. 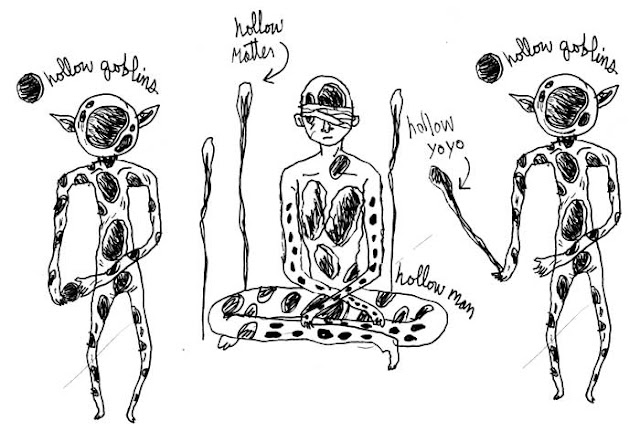 Adventurers must stop the hermit meditation before he generate too much hollow matter and create more hollow creatures.

If someone gently touch his skin with their bare skin: roll a reaction test.
On a very bad result he implode and everyone in a radius of 2d6x5 units must save vs breath weapon to avoid being suck into the hollow world.
On a very good result he cry and close all the holes created by the hollow matter. The hollow creatures become normal creatures eager to learn and to have new experiences.
On a bad or good reaction the hollow creatures hesitate for d6 rounds (they only defend themselves). Other results have no effects.

Killing the hollow man stop the flow hollow matter and the hollow creatures will loose 1hp by hour until they die, leaving empty husks.

Hollow man: as a cleric two level above the group level.
He can't cast any spells but he can empty himself to summon more hollow matter.
While connected to the hollow world he regenerate 1d3 hp by round by slowly draining matter and emotions around him.
Magic resistance: 2% by hit points (the spell is suck in a hole)

Hollow matter creation: by taking 1d6 dmg he can create a 1HD hollow creature.
For each additional d6 dmg he take, he can summon creature with a additional HD up to his own level.
Or he can take 1 point of dmg to make a hollow matter attack (he can do up to 3 hollow attacks by round). Hollow matter creatures have a magic resistance of 2% by current hit points.

Hollow matter: being hit by hollow matter cause d6 dmg and destroy one point of AC.
Plus the target must save VS death to avoid feeling the emptiness of the hollow world.
On a failed save the target feel empty and is infected by a hole connected to the hollow world that drain 1 of his hit point each day (natural healing still occur).
This hole work like a bag of holding. But you have 1 chance on 6 of pulling back a 1/2 HD hollow creature instead of the wanted object. (make a reaction test to see the hollow creature behavior).
Someone who die by hollow matter drain vanish and only leave a hole behind.

Hollow goblins:
Number encountered: start with 1d4+1 but augment the die after each goblin encounter or after each day.
HD: 1
Armor: none
To hit: -2 to hit during the first round since their senses suck outside of the hollow world.
Attacks:


Magic resistance: 2% by hit points (the spell is suck in a hole)

Treasures: you can risk putting your hand in their holes to find stuff that was absorbed in the hollow world... 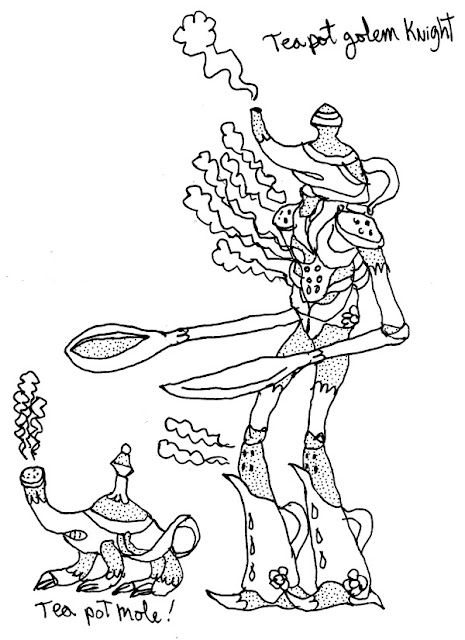 Benjamin B contribution on G+:


Nanna Earwart's kitchen guardian.  It has many powers, depending on the blend of tea she places in its head.  Camomile lets it expel a sleep-induing steam. Smoked tea with ginger and juniper allows it to blast foes with a blinding mist that leaves them unable to see.

"Be a dear, and sit with old Nanna.  We'll have a nice cup, and chat.  I've a lovely white tea brewing, light and clear.  A little slice of lemon is all it needs.  Clean taste, clear conscience.  So easy to talk, so easy to share.   Lovely isn't it?  Now, tell Nanna all about what brought you here."

A representation of the Optical God (from Deep Carbon Observatory): 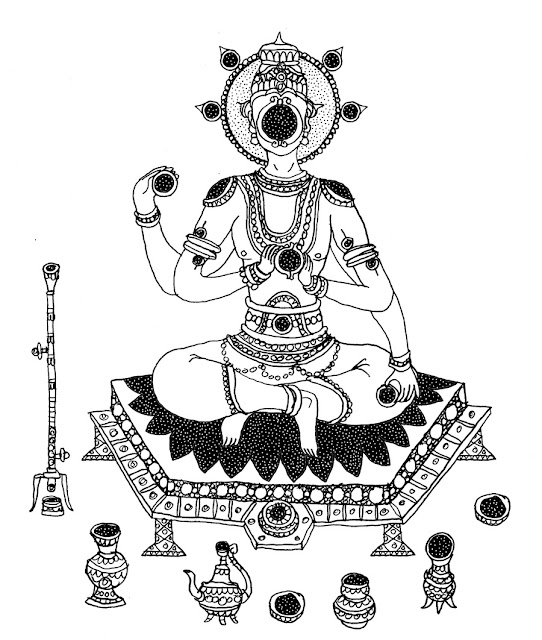 Knight of the Hare King 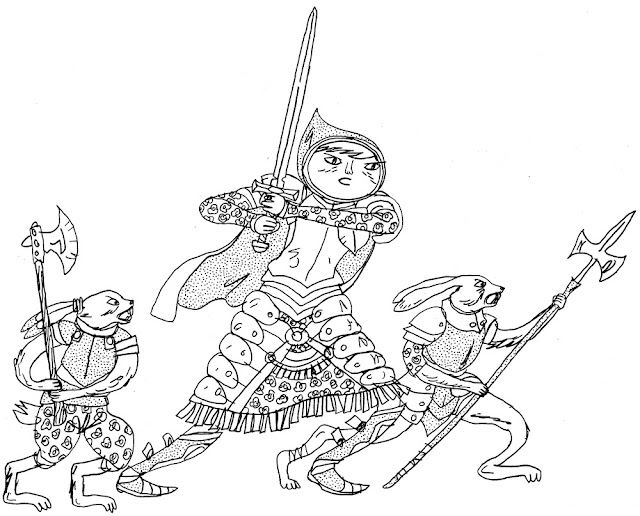 While I visited the Pompeii exhibition in Montréal I noted that many of the Pompeii artefacts bear the mark of other culture influences (especially by Egypt). I thought that this was rarely depicted in dungeons, like for a exemple the ruins of a dwarf fortress often only feature pure dwarven stuff. But it could be interesting to inject some cultural influences from other fantasy cultures and races. Like including a dwarven room containing furniture influenced by elven or kuo-toa art.

So when you build a dungeon linked to a race or a culture, you can roll a d6 for each rooms to see if the room contain some elements influenced from other cultures (could be a 1 chance on a d6) 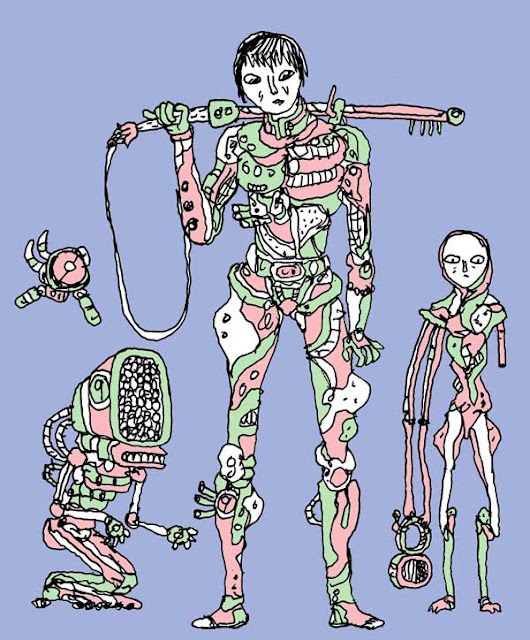