Goblin Phoners always show up when adventurers try to focus on something, like picking a lock, resting or studying spells. They talk loudly on their totemic phones about boring business or personal stuff.

They install their offices were you are and after a few calls other goblins show up to deliver useless stuff and to seem busy doing nothing useful.

Trying to listen to their conversations ask for a saving throw to avoid the effect of a confusion spell (see conversations). ﻿

If you try to talk to them they simply ignore you. If you antagonize them they let you know that you are clearly bothering them. If you start a fight they can dial spells on their totemic phone.

Special abilities:
Phone charges:
totem phones use the goblins ML as their phone charges. To recharge their ML the goblins have to do goblin stuff, they recharge 1d6 charges each time the adventurer take the time to rest. Sometime they also use totemic chargers that they have to plug right were the characters are. A totemic charger recharge 1d6 charges by turn before burning up (cause 1d4 electricity dmg).

If you pick up a totemic phone you can use your HP as charges. 1 charge cost 2 HP.
(4 HP if you have a bad relation with the goblin's totems).

If someone is foolish enough to listen to a goblin conversation (save vs confusion spell) or to take a phone call (save vs charm person) roll a d10 on the conversation table: 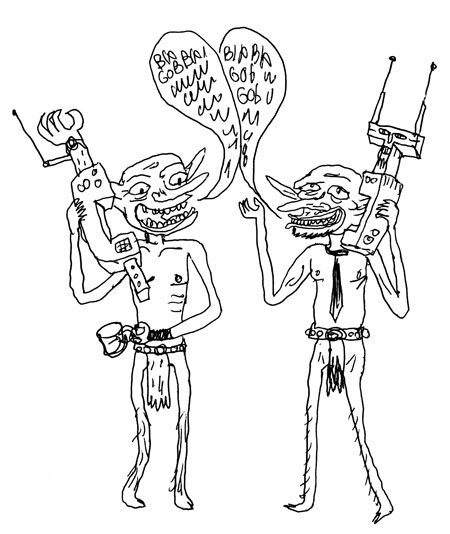 A adjusted mind make a saving throw each day. A passed save restablish one adjustment. The mind malfunction on a natural 1 and trigger a nervous habit and delusion.

The effect last until the next hour.

Note: the hours effects could use some more work. 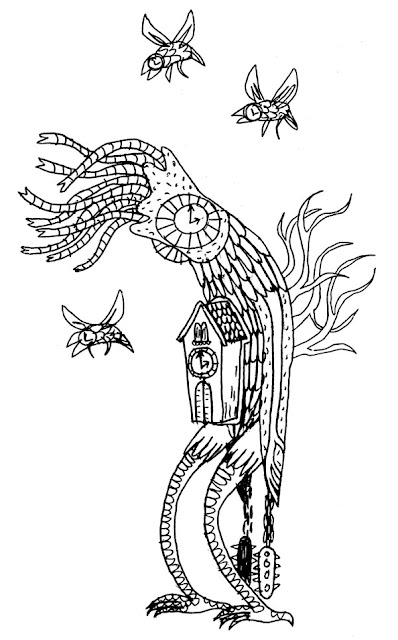 Once the cat select a tune it can play it for up to 1d6 rounds.
Each time someone hit the cat, it randomly change it playing tune.

The cat can teleport once a day, Cheshire cat style.

Records effects: 1d8
1: visual vibrations, displacing effect for +4AC bonus.
2: scratches: area of effect 1d4 dmg attack by rounds to everyone listening. (Invisible claws attacks, must roll to hit)
3: this is my song: charm person single listener (save negate).
4: ear worm: implant suggestion, area of effect. (save negate, -1 to save by listening of the tune)
5: reverse: force a round of rerolls (including the cat).
6: Sonic miauling: 1 dmg by rounds, -2 to any d20 dice roll. Area of effect. (save negate)
7: beautiful song: save vs paralysis or stunned for 2d6 rnds (drop weapons). (single target)
8: catchy tune: save vs spells or dance for 2d6 turns. Contagious by touching (save allowed).

If the cat is reduced to 0hp, it must pass a save to see if it record break.
If it record is broken the cat die. If not, it turn into a magical record player that can be used to play random record effects.
But each time someone play a tune, there is a chance that the cat awaken (cat save vs spell).
Each character that used the cat record will save at -2 against it effects.
When the cat awaken it blink and vanish, Cheshire cat style (dont worry it will be back...).
(Roll new HP for the cat)

Some chaos record cats have unique record that have 1d3 unique magical effects.

Chaos record player cats dont like each other, if someone play a magic record, they usually vanish away (they get +4 to save against magic record effects). 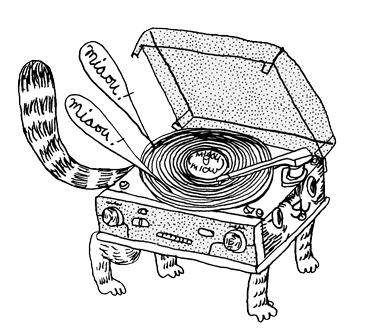 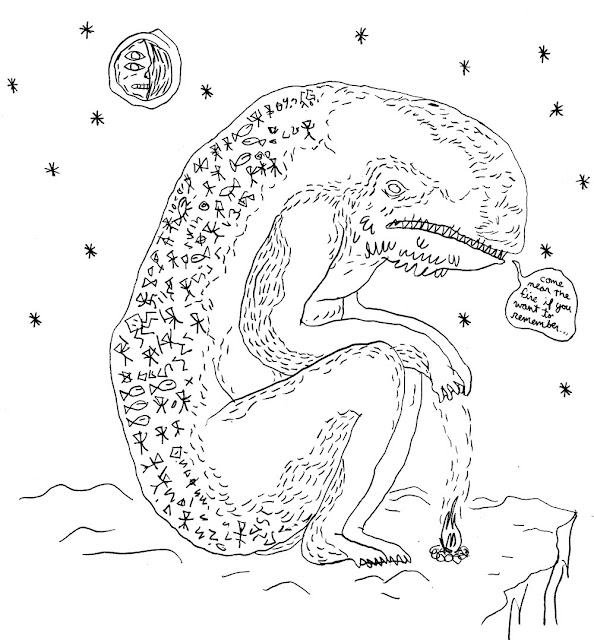 You can look for the Tattooed Old Whale to add a tattoo to the world memory or to get initiated.
To get initiated the Old Whale have to eat you up, then it will throw you up in the spirit world. If you survive, the whale will transfer one of it tattoo to you. Each tattoo give you a ancestral memory and power. The old whale can walk on the land on two feet or swim in the water as a whale. It is possible to hunt and to kill the old whale to eat it flesh to gain dangerous magical power. This is a hard feat since the whale is powerful and it can summon it tattoo against it foes. But this evil deed happened in the past and brought a time of no memories on the world until someone started to tattoo a whale stranded on a beach. The stranded whale remember to walk on two legs and became the new tattooed whale. To prevent the world from falling again into no memory time, this old whale started to distribute it tattoos to worthy men and woman.

You can write a random table of ancestral memories and powers if a player character want to get initiated.

EDIT: some ancestral memories written by Benjamin B.:
1. A memory of biting hunger, felt in the belly, felt in the itchy skin, of scurvy and whispering in the dark, seductive madness, and then the gift of meat, the hot liver of one you loved, given freely, their marrow to sustain you, the kin killing taboo washed away clean by the sacrifice of the one who's love for you eclipsed fear.  You can taste them on your tongue, their blood.  While marked, you never grow physically hungry, and if your share it willingly, your blood can heal those who drink it, hit point for hit point

2. A memory of pain, the gnawing cold of a walrus tusk in your thigh, broken off.  Pull it free, and bleed.  Leave it, and death will come, maybe slower.  No moss to stuff the wound, no fire to seal it, no bitter Spring herbs to chew to stop the pain, no chewed green pulp to stop the fester.  And yet, it is the memory of pain, is it not?  A memory within a memory, as you walk, limping, your heavy hand held tight by the tiny child's beside you.  While marked, you walk with a limb and -5 speed, but your hit points are doubled
Posted by Evlyn M at 11:16 AM 1 comment: