The giwoitis are lizard folk women who take care of the abandoned goats and cattle from the cursed farmlands. They enchant them and offer their milk to lawful and neutral adventurers who can find their enchanted barn.

This is how I like to use alignments in my sandbox games: I assign alignment and different alignment reaction to my special unique encounter. So the interesting parts of the sandbox react differently to lawful, neutral or chaotic characters. (oh yeah, the milk have strange effects on chaotic characters.) 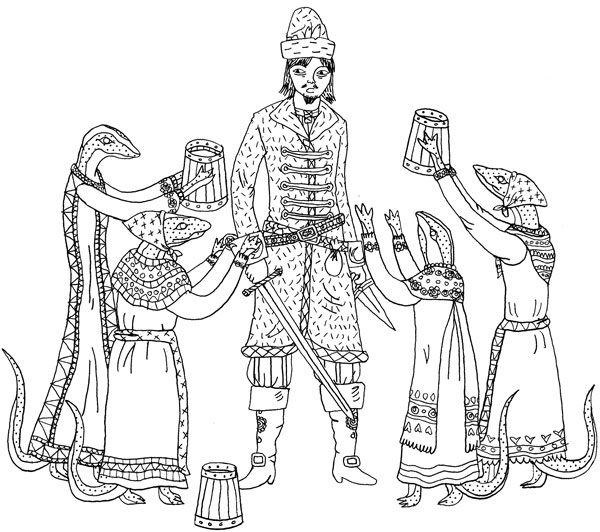 One of the witch graves ossuary from my Labyrinth Lord campaign. 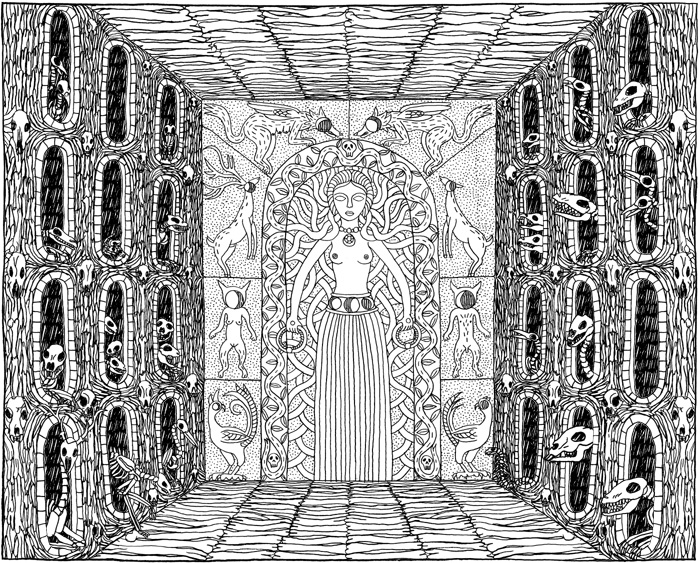 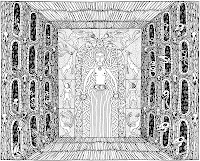 I am playing in my friend Dominic's campaign of Stars Without Number.
I enjoy the group, the game, the system and the campaign a lot. :)
The game's OSR system is neat, I like having only 3 classes, the simple skill system and all the other tweaks.
(check out the Grognardia review)
Creating your character is fun: you choose one of the 3 classes (expert, warrior or psychic), a background and a class training that both determine your starting skills.
Simple, quick and colorful.
My character is Danielle Ros, a biotech crew space marine.
So she is a spacer, she worked for a biotech corporation in a space emergency respond squad.
I established that the biotech corporation went bankrupt after a bio-contamination disaster or scandal. (Think Umbrella corporation). Her squad was disbanded and now she is a adventurer.
I was not super lucky with my attribute rolls, I only rolled a bonus in wisdom, and I got one in dexterity by placing a 14 in one of my class main attributes. But this is fine with me, I like playing characters who only have a few small edges that define them.
We started playing on Priam, a major world. Since we had no ship and we had to write a goal on our character sheet I ended up playing Danielle as a disgruntled marine hating being stuck on the ground and being ready to do anything to go back in space.
As I played her I discovered during our first session that she cared about people, I guess this come from her emergency aid background. During the second session I discovered she missed being in space so much that she now take pills of a drug that provide a zero gravity feeling. During our third session I discovered that she have a weak spot for the mysterious assassin Eliot and Indrani, a resourceful NPC. This is what she is for now.
Here, my friend D•Miranda made a drawing of my character taking her dose of Zero-G drug:
(check out his blog: Jaguar Combat :) 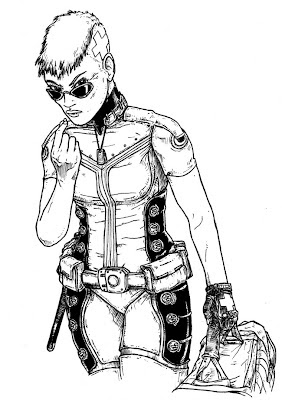 The group is composed of 6 players (2 female & 4 male players playing 2 female & 4 male characters):
- Drake the born noble commando.
- Danielle the biotech crew space marine.
- Eliot the security crew assassin.
- James Flanagan, adventurer and criminal
- Griff the technician pilot
- Constance the rogue psychic priestess
In 3 sessions we had two characters reduced to zero hit point, but we had no casualty thanks to the 6 rounds we have to stabilize them. With the XP we gained at the end of the third session all the characters will able to reach level two at the start of our next session.
This is the first time I have a great time playing in such a large group. The session are very packed, we often hesitate at the start as people figure out what they want to do, but once we choose the action move quickly and a lot of stuff happen. The referee never use "no" on failed skill tests, he always use "no but..." I like it, this work well for a 6 players group as it keep things moving. We play one session missions, which is great since we feel that we accomplish something each time we play. For now we miss a little bit of time at the end of the session to wrap things up. I wish we had the time to play a few follow up scene with NPC and other PC. But this is ok.
During session 2 we were able to steal a transport ship that a faction planned to sabotage. Now we have to find a way to repair it jump drive. Earning the ship was really fun. I admit that at first I was a little bit worried that it could take us a lot of time before we could able to buy our own ship to explore the space sand-box.
Doing missions on the starting planet is fun, but what really interest us all is exploring the sandbox and having galactic adventures. I din't read the whole SWN PDF, but I wonder if there is advice or guide lines about how to get the group in space to let them explore the starmap sandbox on their own. That said, I think it was well and fairly handled in our campaign.
Next session we are probably going to explore a derelict spaceship that crashed in the rock desert in hope of salvaging tech to repair our own ship.
Posted by Evlyn M at 12:28 PM No comments:

Email ThisBlogThis!Share to TwitterShare to FacebookShare to Pinterest
Labels: D Miranda, Jaguar Combat, my characters, our campaign, Stars Without Number

I have traded some demons with Scrap Princess.
Glorious pictures of the Marilith I have adopted.
I could not take a picture of my own, so I have drawn her:

Tonight session din't go very well.
I am closing down my LotFP campaign and taking a break from being the referee.
(but I will be a player in a Stars Without Number campaign)
I will also take a break from this blog to focus more on my personal drawings
But I will still visit your blogs. It was very interesting to read you all.
Posted by Evlyn M at 11:25 PM 4 comments: