A idol of the Lady of Grains, one of the mysterious figure that haunt the abandoned farmlands of my Northern Marches campaign. She rule over grains, madness, curses and unlife. Her worshipers can create unlife by stuffing the corpse of a loved one with grains while evoking her name. Some say that she can turn grains into gold.


"She assailed folk working at noon causing heatstrokes and aches in the neck. Sometime she even caused madness." 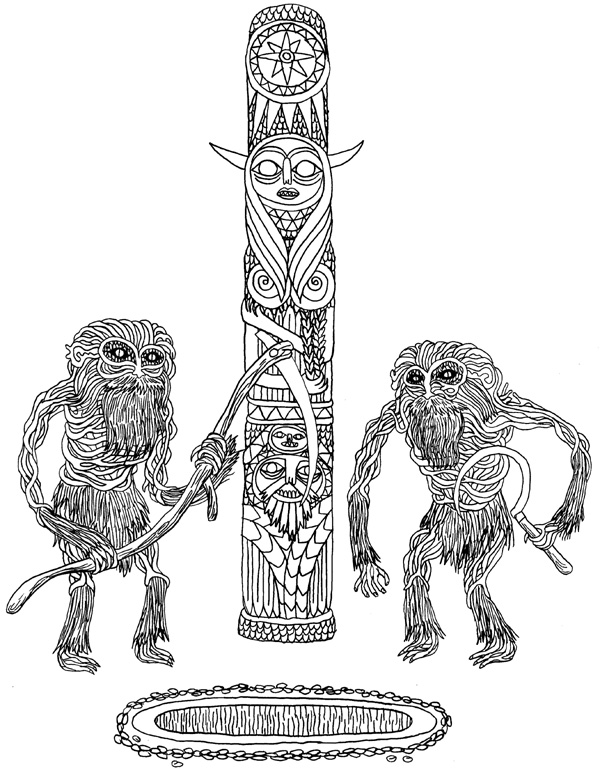 Some of the creatures the adventurers have encountered in the abandoned farmlands and in the dark forest:

I have been busy for some time, and my gaming was also starting to take a lot of my mind-space so I felt like I din't had the time to both game and blog about it.

But now I have some drawings to post for this blog, so I will reactivate it for a while.

I have been busy with finding work, getting involve with the protest movement here in Quebec and with personal illustration projects.

On the gaming side, I have tried some indy games, participated in a local con and I am now regularly refeering my Labyrinth Lord,(west marches style) campaign.

The indy games I have tried/played:

- Shock: Social Science Fiction:
We played one shock in two session. It was about the human race being put in tutelage by "benevolent" aliens. Shock was interesting to play, but the game text was sometime confusing and since this is a GMless game, we were sometime unsure about how or when to intervene at the table. Also this is a game where you have to do a lot of improvisation and everything can easily become too vague or confuse. In the end the result was fine, we ended up with a interesting story, but while we were actually playing the game, I dint especially enjoy myself (but it was ok). I am not writing off Shock, I think the game could be more interesting if we play a series of shocks like it suggested in the game where a shock = a chapter of a book. In average you play 3 scenes by shocks, so when you just play one shock, you have to resolve your entire character's arc and setting issues in only 3 scenes. The jumps between the scenes are huge and the stakes can easily become too big and the world feel less "real". But I think that when you play a series of shocks you feel less pressure to play with HUGE stakes, and the game fiction flow more naturally. I think Shock is a game that you have to play a lot before feeling comfortable while improvising with. I would also like to try Human Contact.

- Dogs in the Vinyard:
A game I was curious about but that I skipped many time because the setting was leaving me indifferent. I am glad that we finally tried it, because once you are playing, the setting really shine and is really fun to engage. The game system is also super fun to use and not so abstract, I really enjoyed it a lot. But what I enjoyed the most is how your character traits change and evolve while playing. It make you feel like everything you do have a impact or leave a mark on your character, this is super rewarding. We played two town in 3 sessions and if we had a third player I would really have liked to continue playing. One-shots of DitV seem fine, but l think the game is way more involving when played as a campaign. This game is now definitively on my playlist.

- Ocean:
A GM less game about amnesiac survivors exploring a underwater station. It was fun, but I think the overall concept was more interesting then our actual gameplay. There is so much improvisation to do, it easy to get creatively tired or lazy and then the game become too vague or generic. (And due to the underwater station setup, it easy to slip and to get repetitive with the obstacles). I was hoping for more character interactions and sexy moments, but we din't get any. I still think Ocean is a interesting game, I would play it again if offered, but I don't think I will be offering it myself (since there is so many other games I want to play).

- Burning Empires:
I wanted to take the time to learn this game, so we decided to run a 2 players campaign to be able to get more familiar with the system (even if we had some good experiences with Burning Wheel). Our setup was really nice, I liked the world we had burned and all the characters beliefs, but at the last minute one of us decided to leave our small group and so we had to cancel everything. Damn!

- Apocalypse World:
I so want to enjoy this game! I like everything in it, but when we play it never deliver! Everything always end up being so unengaging. It just don't rock. (not because of the game system)

The Geek-o-thon:
A small one-day local con here in Montreal.

In the morning I tried to run a game of Apocalypse World. I know, I am obstinate! It was ok, but again it din't rock! And it was definitively not sexy! (even with a hot and sweaty setup).

In the afternoon I played in a game of Savage World Hellfrost. It was nice, I enjoyed the game and the arctic expedition scenario, but the con room was so noisy, I had a huge headache and a hard time keeping myself in the game.

In the evening I played a game of Lady Blackbird. This game ROCKED! It was so fun and dynamic! I really enjoyed it. I played captain Cyrus Vance and I was scoring my keys non-stop while giving daring orders and trying to get close to Lady Blackbird. Sadly the 2 players playing Lady Blackbird and her bodyguard were very protective and I was not able to get close to the lady to gain her heart. The game is so fun, I would like to try it with every characters. Huge replay value! :)

-Stars Without Number:
We played 5 or 6 sessions and we were all close to getting to level 3. But the referee din't had the time to prep his sessions so we decided to switch to Labyrinth Lord since my campaign was already prepared. Stars Without Number was super fun, I enjoyed all of our sessions and the derelict spaceship was a fun dungeon to explore. But strangely the character being too easy to save when they reach zero hit point and the fact the no one died ended up making the game kind of less exciting for me. I like how character dead become a event to be remembered and I also like to see characters join the group. So I think I prefer my OSR gaming with stronger zero hit points consequences.

-Labyrinth Lord:
I am now regularly running my Northern Marches campaign with a group of 5 to 7 players. We played 6 expeditions, the characters are now mostly level 2 and 3. It really interesting to see the group discovering and exploring the sandbox. I really enjoy being the referee for this campaign, the interactions with the players are just so fun and exciting. And as a referee I am also learning a lot. Running the game for 7 players is a good challenge, but so far it work very well. (for other kind of games my comfort zone is usually 3 or 4 players, but hexe crawling with OSR games seem to play very well with many players :).