Mole folk of the Undersoil

I posted a drawing of a armored mole princess on G+ and I jammed a bit with Arturs Leitans, Benjamin Baugh, Daniel Lofton and Ray Otus on the mole folks.


The Mole Folk live in the Undersoil, the upper level of the underworld, a breathing underground world, communicating with the surface world and teeming with life. In contrast the Underdark is a cold and dead place, mole folks rarely venture there.

Princess Margery Scroffus Whiskerworm, in her royal family armor, ready to hunt tasty giant bugs or to defend the kingdom’s burrows.
"I can smell em!" 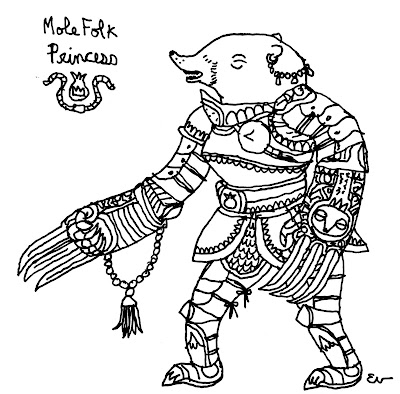 Mole folk wizards are star-nosed moles, they smell and feel the aetheric dirtways, the spiritflows, and the timbre and texture of local reality. Starnose wizard have long drooping nose tendrils, almost down to their feet. Apprentice have little nubby ones, as they have just started growing in, as they gain experience, their sense organs get bigger and their eyes, already small, slowly fade back into their fur.

"I am Ergo the Molenificent, short in stature, tall in power, narrow of vision, and wide of purpose."
"Taste of the fermented worm juice, let it open your nose to the dirt around you. There! Feel the tremor and reach toward it. Open your inner eimer."
"Follow your nose, my apprentice. All dirt is one dirt, all tunnels connect, the darkness arrives before the light, the darkness is already there. Light locks us to a place and time, it defines and limits. You will learn to as all deepseekers do never to trust light. Now, spread out your noise and feel for the way home. It is not far, not really. It is a close as the dark all around us."

A Starnose wizard digging out a spell from the aetheric dirtway: 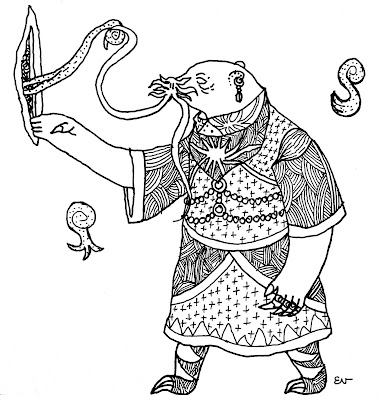 The principal enemies of the mole folk are invasive rather than predatory, they reproduce so fast that they keep expanding into mole territory. And moles, generally pacifists, have to find clever ways to turn them back. Confusion spells, earthworks, traps, etc.

"Listen, young mole warriors, if you happen upon a cicada burrow do not crack the seal. Our shamans track their cycles and prepare for them. While an early awakening of a cicada swarm is not directly harmful to molefolk, being unprepared for their song disrupts our dirt senses. And the swarm, as always, attracts predators."

The cold worms have taken over the mind of the kobolds’ clans leaders and the kobolds are becoming more and more aggressive and invasive. The kobolds use war insects, the moles consider these insects as a delicacy but now they are often infected with parasite worms. The kobolds also hire hard boiled troglodytes mercenaries and made dark pacts with the voles, ever the cowardly jealous enemy of moles.

The starnosed wizard can use their aetheric senses to detect the presence of the worms, some suspect that the voles started the worm infestation with a corrupted gift, hoping to use the kobolds against the moles.

The blind Molerat tribes also often invade the mole folk’s territory, always mining and digging new tunnels. Each tribe is protected from the worms by a creepy hive mind totem spirit. They speak with one voice, the same, monotone. 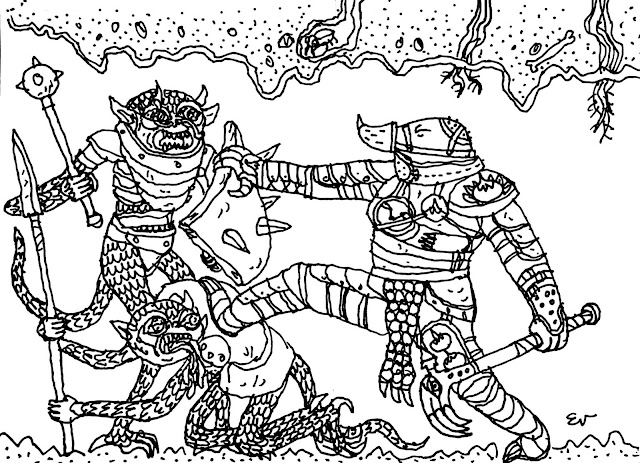 Tarantulan merchants, carrying their wares on their backs, famous for their bolts of silk cloth dyed by the roots, berries, and insect organs they chew and mix when pulling silk before putting it on their looms. The tarantulans remain neutral, seeking to sell their wares rather than engage in conflicts. They are a gregarious folk though, and always happy to sit and sip anise tea and gossip about what they've learned in their wanderings.

Shovel nose wyrms, thes giant sentient snakes are like dragons. This is always bad news when a female lay her eggs nearby.

The hagmoles... fear their ways. There are voices, wispers from the deeps, the cold dead realm of silence and stone. They promise power, they promise knowledge, secret and forgotten and forbidden. Some moles stray, abandoning the warmth of the homesoil, root and grub, and the company of their fellows. They delve deeply. They grow thin, for little lives in the deep dark that is fit to eat. They grow cold. They hunger. These hagmoles can nor endure the warmth of the high deeps, but creep about below, whispering promises, offering power, favors, secrets.

"Your mole-crew erupts into a huge tunnel that continues into the lower underground, out of the range of your tremorsense. What monstrosity could have made this?" 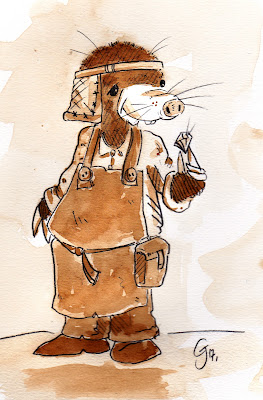 My interpretation of the Balrog from LotR.


"Something was coming up behind them. What it was could not be seen: it was like a great shadow, in the middle of which was a dark form, of man-shape maybe, yet greater; and a power and terror seemed to be in it and to go before it." 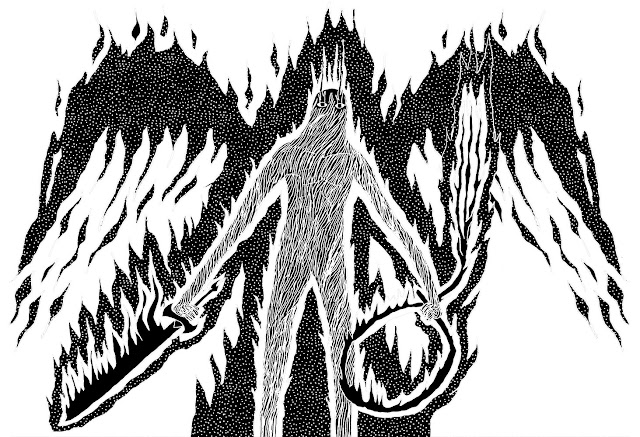 Surprise! I found back all the files of the Void Beaver dungeon we crafted on G+ a loooong time ago and I assembled everything together.
This was originally a initiative by Karl Stjernberg and Jfur Moonpoison.
Karl drew the cover and the map while Jennifer assembled everything together and edited the text into something gameable. I then contributed more than a dozen illustrations.
Enjoy and beware of the Void!
Free PDF version: https://drive.google.com/file/d/17Xl1rmzgjLzHMBsoCAST5SD0kdahSGRB/view?usp=sharing
Print version (at cost): http://www.lulu.com/shop/evlyn-moreau/mudwarren-alley/paperback/product-23840547.html 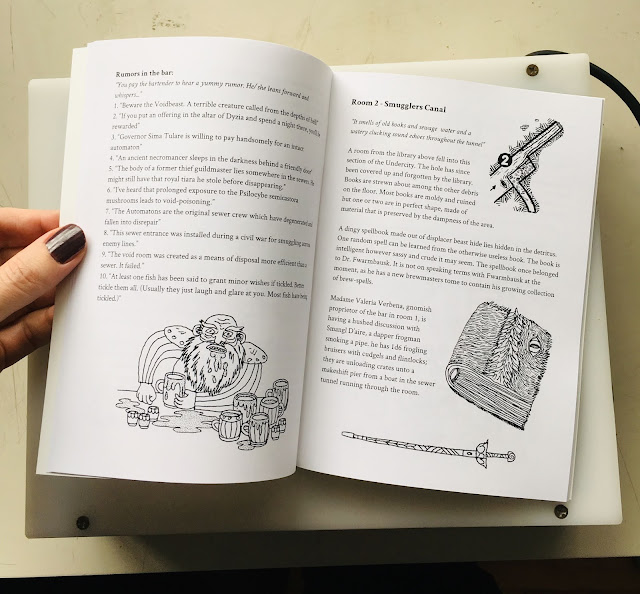 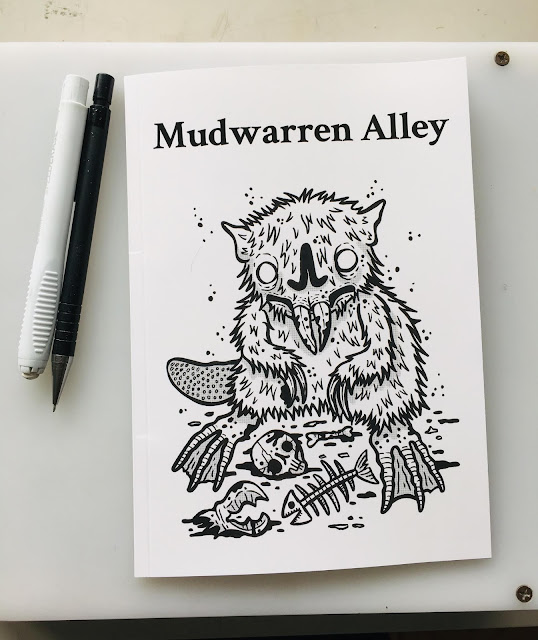 Email ThisBlogThis!Share to TwitterShare to FacebookShare to Pinterest
Labels: zine

This is a other G+ community project, I drew a cosmic crawl map and people on G+ wrote descriptions for it different locations. I compiled everything and wrote random tables for each entries.

Also since my Patreon reached one if it objective I was able to put more time into the zine and draw additional illustrations! :)

When we filled the map I was really unsure if it would end up giving something gameable or not.
I am looking forward reading your feedbacks about the whole thing as I am very curious of what people will think of it.

Print version on LULU (better wait for the free shipping coupon to be active):
http://www.lulu.com/shop/evlyn-moreau/cosmic-crawl/paperback/product-23823323.html 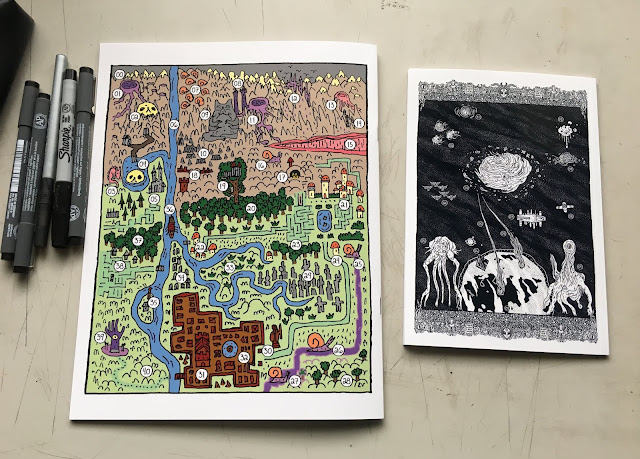 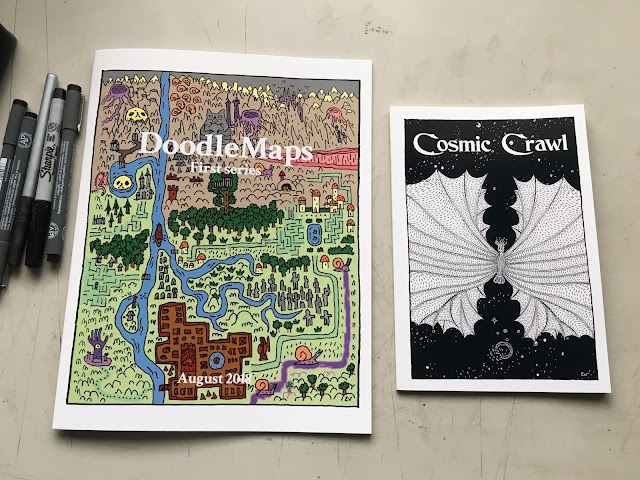