I started with a tortoise and I ended up with a rust monster: 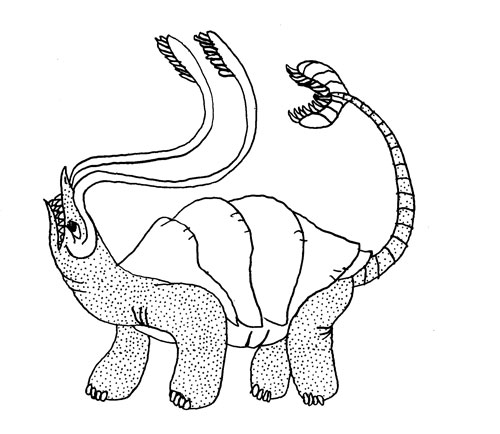 Speed drawing from this morning. 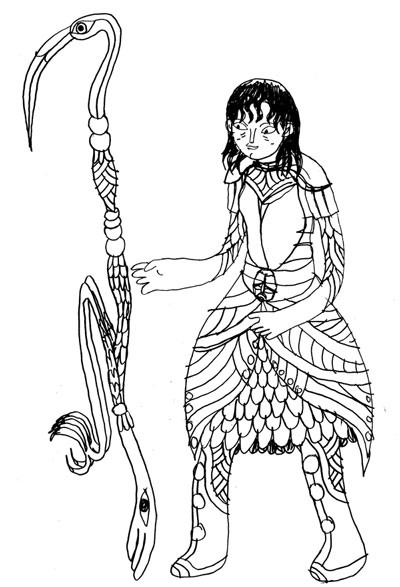 Following the trail of random encounters.

During a hex-crawl, make it easy for the group to track or follow the trail of random encounters. This turn random encounters into potential opportunities. (If you have tracking specialists, don't ask for tests to see if they are able to follow the trail. Instead make them roll to see if they gain a advantage over their target or give them extra info or some other edge).

Use this table if the group track, trail or pursuit who or what they have encountered.

When the result don't seem to be the final destination of the pursued, simply roll again on the table if the group continue to trail them. Add 3 to the result each time you roll.

If after reaching a destination that seem final, the group want to continue to look for the home of the pursued, reset the d20 modificator to zero. But the trail can be harder to follow from here.

Note that your can use the same table for when the group is fleeing from a encounter (just inverse pursued and pursuer).
Posted by Evlyn M at 12:22 AM 2 comments:

My list of works in progress (and potential vaporwares). 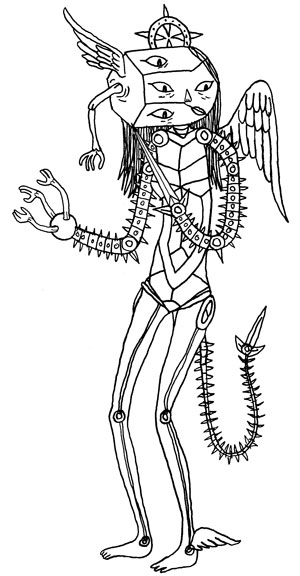 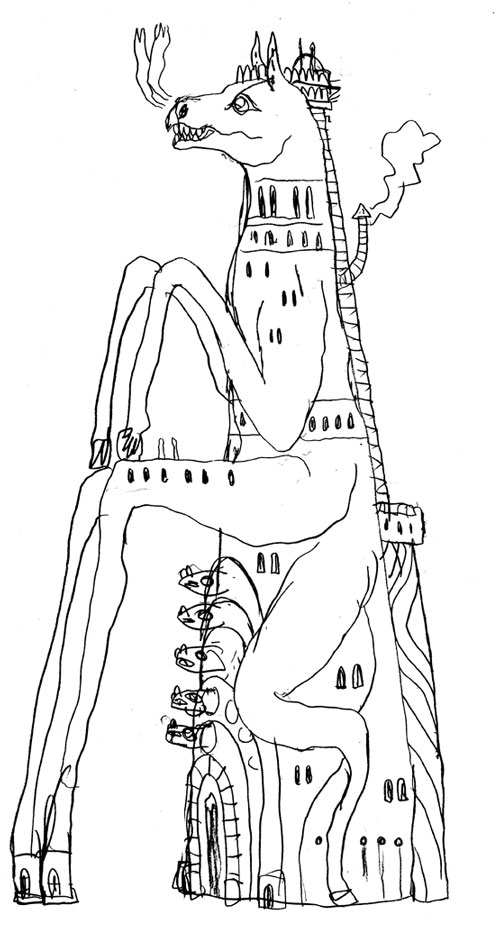 Email ThisBlogThis!Share to TwitterShare to FacebookShare to Pinterest
Labels: dungeon, work in progress

Monks of the Holyphant Hanging Monastery

So now I have two unfinished dungeons to finish thanks to Metal vs Skin (a good thing!)

So here is plan C. (Also unfinished, I wanted to describe the monastery and it monks, but I am already late for the deadline). 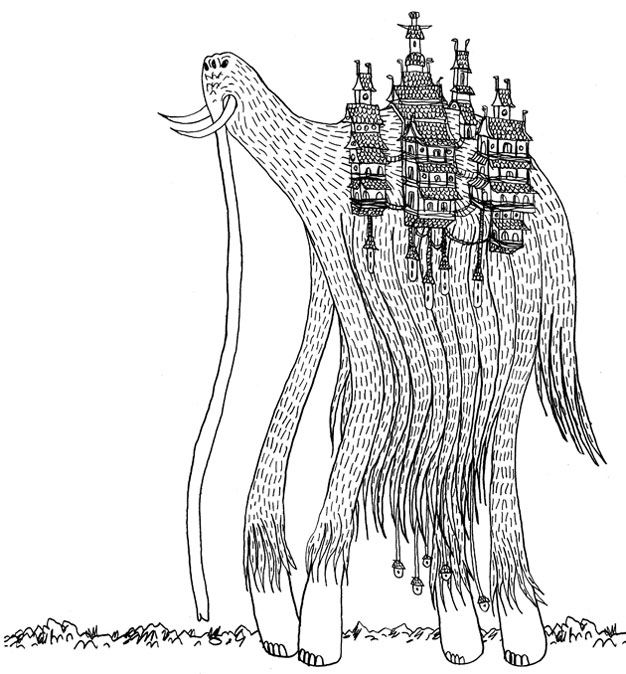 The less a Blade Sorceress is free to move, the more powerful is her telekinetic powers.
This is why they wear clothing and ornaments that reduce their mobility. 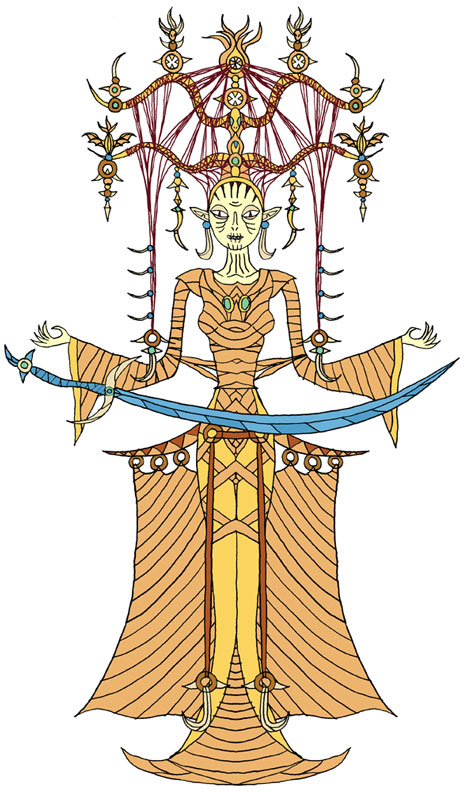 You get one telekinetic focus by level. (it nice to use small tokens to represent them)

You can activate 1 telekinetic power by round (except for deflect attacks).

The foci you spend on a power can be maintained for a number of rounds equal to your INT + your level (or for a entire encounter if you don't like counting rounds). While maintained, those foci are not available to activate other powers.

You regain 1 focus by level of restrictive clothing by turn of rest (while being totally immobile).

Your telekinetic range is equal to your INT + your level in yards.

Control blades (can be maintained)
-Effect: each focus you spend give you control over 1 bladed weapon (that do up to a d6 damage). You get 1 attack by round for each weapon you control. You can control a maximum of 1 weapon by level.
-Extra focus: you can control a d8 weapon with 2 foci or a d10 weapon with 3 foci.
You can also spend extra foci to better control a weapon. While doing so you get +1 to hit for each extra focus spend (up to your INT modifier). If you control multiples weapons you must control every weapon with the same amount of foci (so with 4 foci you can control two blades with 2 foci each).
Note: while you maintain your power, your blades float passively around you while you use a different power (instead of dropping to the ground).
Note: you can try to take control of the blades of your your enemies but they get a saving throw to resist.

Project small blades
-Effect: each focus you spend let you throw 1 dagger sized blade up to it normal throwing range + your telekinetic range. You can recall all of your blades for 1 focus.
-Extra focus: you can spend 1 extra focus by blades to get +1 damage (but you can not spend more than 1 focus by blades).

Project enemy
-Effect: you can project 1 enemy up to 10 yards. If they hit a wall, they take d4 of damage.
This damage can be resisted with a saving throw. Enemies that fail their save fall prone.
-Extra focus: You can spend extra foci to throw extra enemies (1 focus by enemy).
You can also spend extra foci to throw them harder (+5 to projected distance by focus). A target will take 1 extra point of damage for each extra 10 yards of projection distance.

Telekinetic manipulation (can be maintained)
-Effect: you can use your INT as your STR score to manipulate a object.
-Extra focus: +1 object / +1 yards by focus / +1 “STR” by focus.
Note: if you affect multiple objects, you need to split your "STR" between them.

Deflect attacks (you can activate this power with a other one)
-Effect: each focus give +2 AC vs one attack. You can distribute your focuses between different attacks. You can protect other characters.

Blades Barrier (can be maintained)
-Effect: this power require 2 foci and at least 2 blades. Any enemy that attack you in melee must make a saving throw to avoid taking d6 of damage. The enemy get a negative modifier to hit equal to the damage taken (for this attack).
-Extra focus: each 2 extra focus give a -1 to the enemy saving throws and require 2 extra blades.
Notes: a barrier of daggers do d4 damage.

Levitate (can be maintained)
-Effect: each focus spend let you levitate 2 yards away from the ground (or a ledge) at the speed of 2 yards by round.
Posted by Evlyn M at 12:42 PM 5 comments: