Review: The Corruption of Pelursk by Shel Kahn

The Corruption of Pelursk by Shel Kahn

The Corruption of Pelursk is a hex-crawl adventure created and self published by Shel Kahn. It come as a zine or as a pocket pack where everything is packaged in a pencil case that contain beautiful fabric maps and other gaming aids. 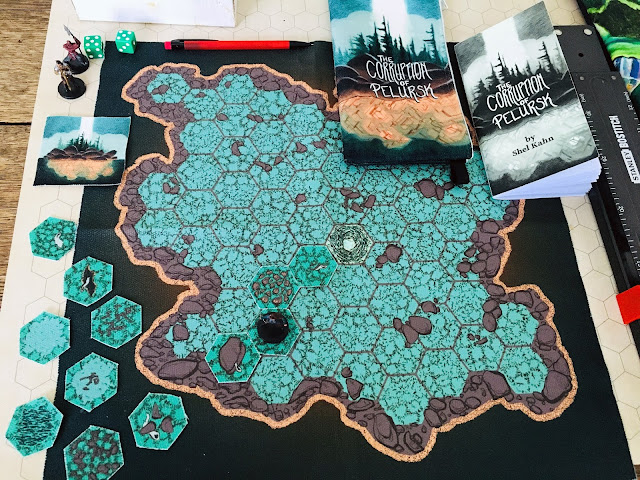 The adventure premise assume that the characters are looking for rare magical crystals, there is a shortage of these crystals and being unable to find any, the adventurers decided to travel to where the crystal are collected to find some on their own.

Their journey will take them to the small town of Black Lake, after meeting some of it inhabitants and learning about why there is a shortage of crystals they will venture into the crystal island where they will play a small hex-crawl that will lead them to a key encounter. Back to the small town they will have to deal with the fallouts of their actions.

The adventure is well written, Shel is very good at setting up the atmosphere. The different steps of the adventure are well presented and easy to follow. Naturally the players won’t probably follow the assumed course of events, but this is not problematic.

I personally prefer a tiny bit less descriptions but I think that the level of description is well balanced between usefulness and atmosphere setup.

The small town of Black Lake is rough while charming, kind of like a earnest frontier town. It relation with the magical crystals create a interesting situation worth exploring. The town gave me a good studio Ghibli or Earthsea vibe, the inhabitants being earnest and positive but also serious folks who have their own baggage to deal with. This make them engaging and the adventure assume that the group will learn to know some of them but there is also a chance that a group would entirely skip the town to sneak on the island on their own. This is not a problem but it would certainly change the feel of the adventure.

The hex-crawl is well presented and very interactive. It is played on a hex map printed on a fabric and use a collection of 12 fabric hexes that can move around on the map, depending on different situations. This add a unexpected aspect to the crawl. There is three sets of encounters: ruins, ghost and island reactions. The backstory of the island is hinted at through the encounters. The whole story is not revealed but enough is hinted to fuel the players curiosity. There is no real combat encounters, the dangerous encounters are mostly traps or dangerous obstacles.

A lot of these encounters deal damage to the characters, some of it can be avoided by making saving throws but the amount of damage that a group will receive is really random and hard to evaluate. For a low level group, especially with characters with 1d4 and 1d6 HP, this can become VERY deadly. Running this adventure as a funnel for 0 level characters would probably lead to a very high body count. But I guess that the players can find clever ways to avoid some of the damages. Playing the adventure in a “new school” mode would certainly be more deadly as the game mechanics would constantly inflict damages to the characters, while running it in “old school” mode would give more occasions for the players to find clever ways to avoid relying on passing saving throws to survive.

The key encounter is interesting (but also probably deadly) and potentially lead to a more interesting situation.

I really like how everything in the adventure is socially interconnected. The town situation is subtle and engaging while being optional to the adventure. I like that the spine of the adventure is simple enough to grasp and to remember, after a single read I feel like I could easily run it. The fabric elements add a nice tactile feel that fit with the setting where everything is handcrafted by people.

I am intrigued by how the hex-crawl run at the game table. Because of the multiple sources of damage I think that the GM must be careful to give space for the players to find solutions and clever ways to avoid some of the damage instead of just asking them to make saving throws.

Depending on how much the group interact with the town, I guess that the adventure can be run in one or two sessions.

The only thing missing is maybe a few illustrations in the adventure booklet. Not much, maybe just 2 or 3 to add more flavor. But starting to do illustrations for your own publication is dangerous as you can always do more and you have to set yourself some limits.

How would I run the adventure?

For a one shot I would probably run the adventure with characters born in Black Lake Town. I would make them return to their hometown to have a “homecoming” vibe or I would simply start directly in the town and ask them questions about how their family is dealing with the crystals shortage to directly link them to the town situation.

For a campaign already running, I would simply make a third party hire the adventurers to get the crystals instead of forcing the group to have a personal need for the crystals. Naturally I would try to give the third party a interesting goal.

I have a weak spot for village and community based campaigns so I would probably run the adventure for villager folks.

Running “The Corruption of Pelursk” with Shel’s other pocket adventure “Keep on the Shinning Isle” is certainly tempting. I imagine a crystal islands campaign having a nice Earthsea vibe. 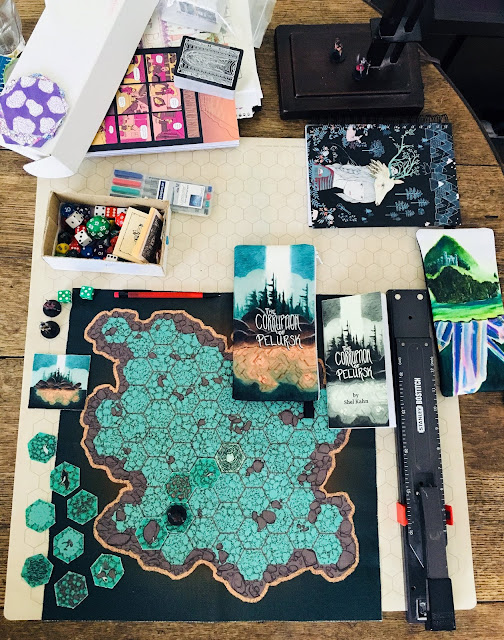 Some commissioned work I did 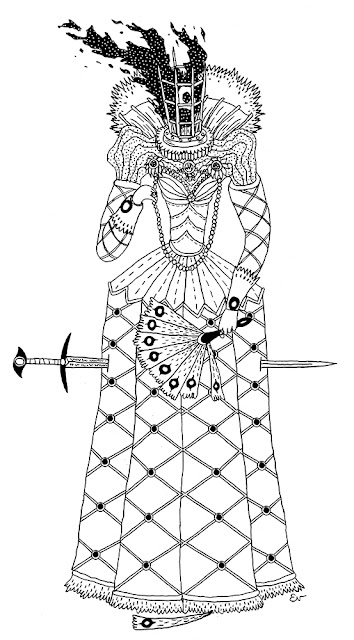 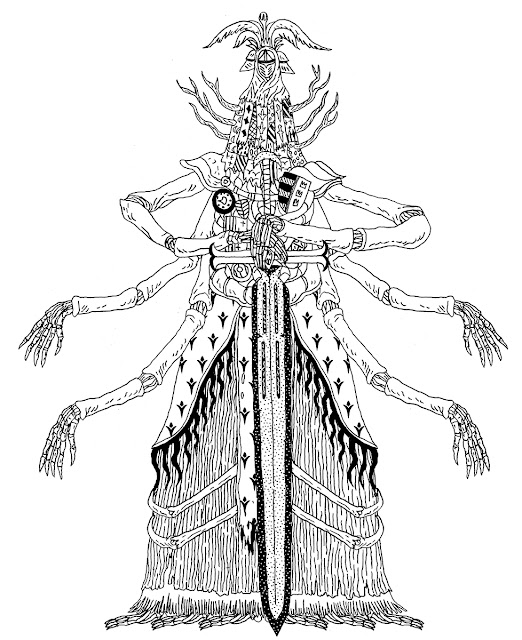 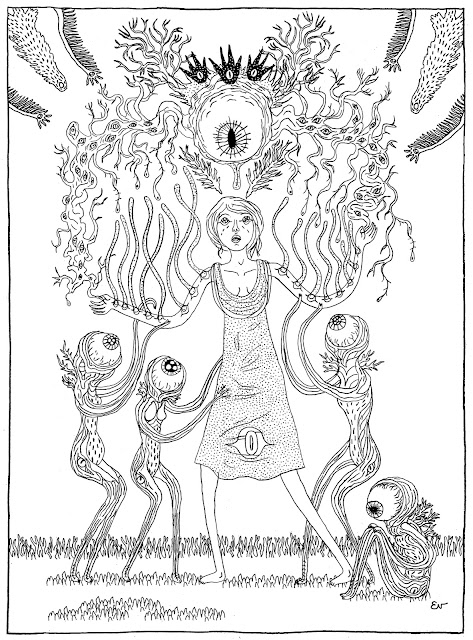 I made a new zine: The Kobolds' Exhibition!

Bookship18 is still active until midnight and I finished my kobolds zine:
http://www.lulu.com/shop/evlyn-moreau/the-kobolds-art-exhibition/paperback/product-23688076.html
You can get the PDF on LULU or on Gumroad: https://gum.co/koboldexhibition
(If you contributed to the zine, check out first on G+)
I want to try to make a "print at home" PDF to put on Gumroad, but I will try to do it a few days (I need a break from this project). :)
The 32 pages zine present a tribe of kobolds who move from dungeon to dungeon in search of artworks to collect.
Content:
>The art collector, the exhibition,
>the kobolds (their roles and how they collect artworks),
>a d100 artworks random table,
>art forgeries,
>artworks enchantments,
>how to dungeon delve into artwork,
>tables to generate a artwork point-crawl,
>a list of 30 kobolds troubles to solve. 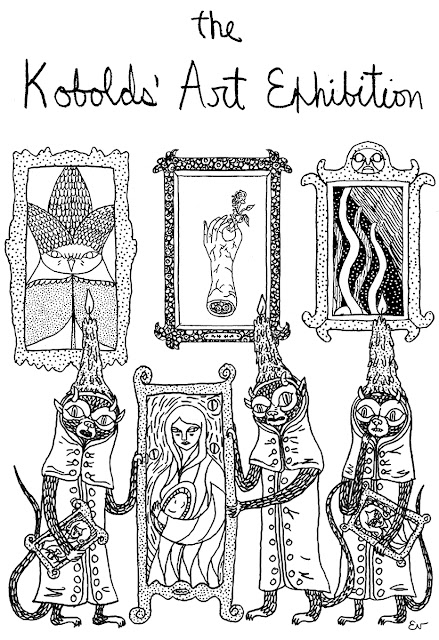 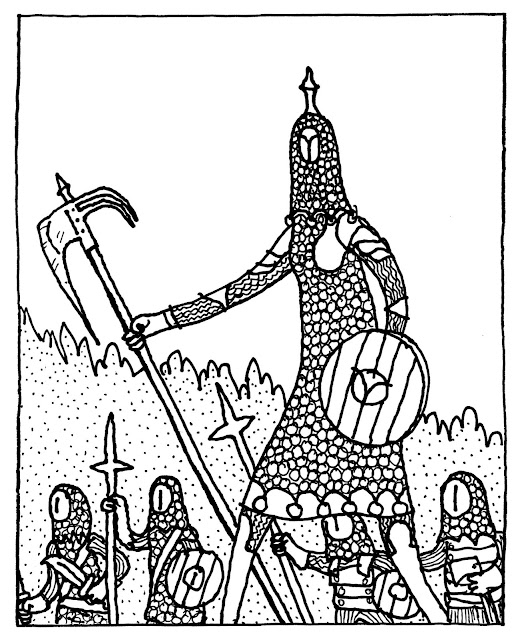 This Daruma doll was a birthday gift from my friend Iris in 2017. I wished to earn my life with my art. Or at least to be able to pay my rent.

I painted the other eye because 1 year later, with my hours being completely cuts at the library I now have to pay my rent with my art. So while I don’t earn enough money to do it, I guess I kind of achieved my goal. 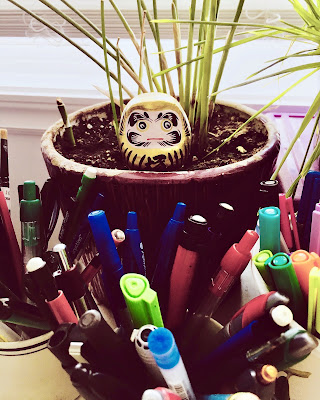 On other news, I finally found the courage to call some clinics and I have a rendez-vous to hopefully start my Hormone Replacement Therapy (HRT) 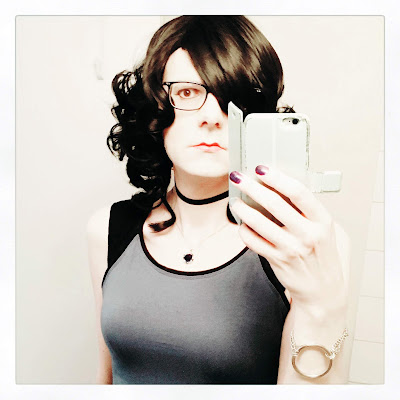 "We said no spells."

Something a bit different: 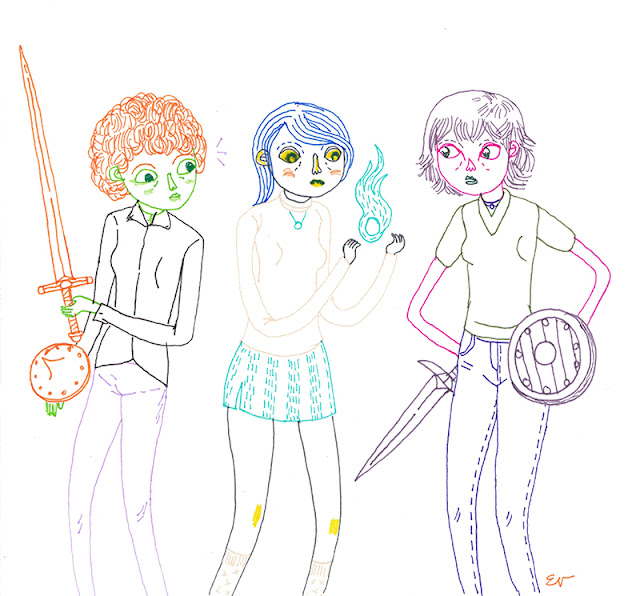 Email ThisBlogThis!Share to TwitterShare to FacebookShare to Pinterest
Labels: adventurers 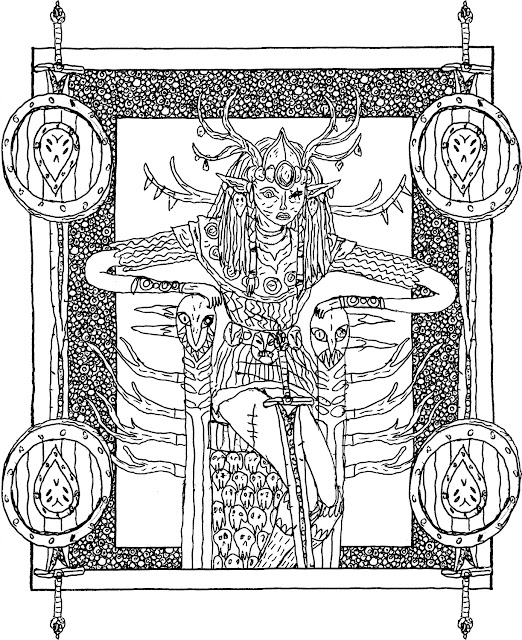