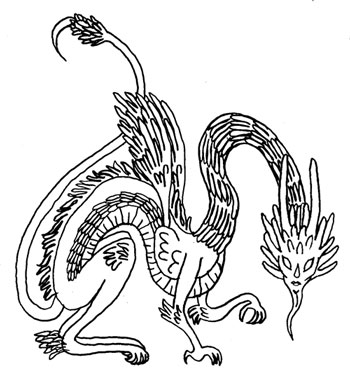 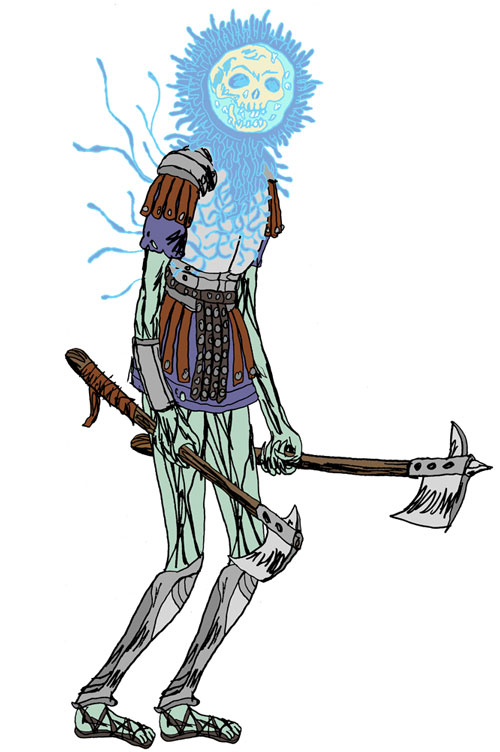 Mixing liquid from the orcs spawning pools with healing potions.


-Benjamin B:
Can you carry that stuff in a bottle?  Distilled alchemical essence of pig-orc.  Making it is... gruesome.  But it is ever so useful for the morally flexible wizard on the go. ﻿

-Evlyn:
But dont mix your orcs spawning bottles with your healing potions. ﻿

-Benjamin B:
Hmmm... or perhaps you'd want to do that.  Mix up a little healing and orc, to make a shapechange cocktail. "It tastes terrible, so I added a shot of dwarven brandy.""Dwarven brandy tastes terrible by itself!""That's why I didn't waste the Elven mead on it.  Drink up buddy." ﻿ 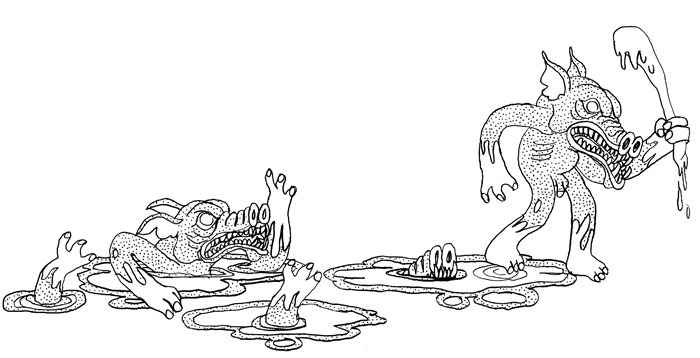 Bottles of alchemical essence of pig-orc:
You can fill a bottle with enough essence to maybe spawn a small misshapen pig-orc.
Just throw the bottle like a flask of oil (to check if it break) and roll a d6 to see what you have spawned:

If you use more than one bottle in the same spot, add +1 to the roll for each additional bottles.
(Exp.: If you throw 3 bottles in a corner, roll a d6+2)

You can dilute the pig-orc essence with ordinary oil to roll a d4 instead of a d6.

Note that you don't control the pig-orcs, if you don't charm them they will probably attack you like any other orcs.

Drinking pure pig-orc essence: -3 to your saving throw, you don't get the d6 healing effect but you get the regeneration effect and the side effects. On a failed save you get d6 side effects instead of only a d3.

Drinking the mix:
You heal a d6 hp and you regenerate 1 hp by round for 2d6 rounds + your CON bonus.
But you also need to make a saving throw VS poison (or polymorph):
Mixing the nasty stuff with alcoholic beverages: 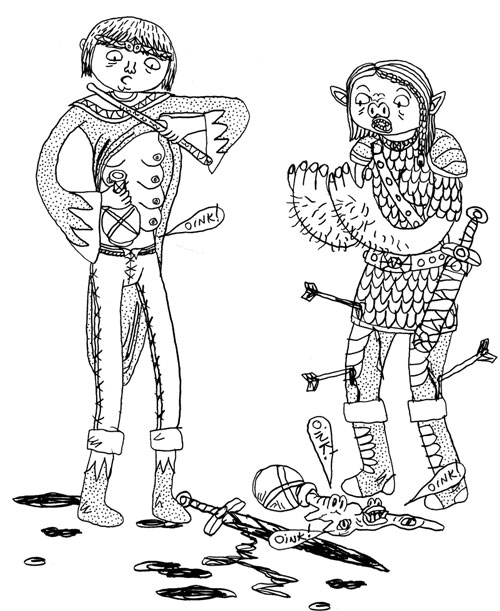 The manga/anime Attack on Titans take on the monsters (zombie) apocalypse is really interesting, those grotesques giant humanoids are so unsettling and intriguing. 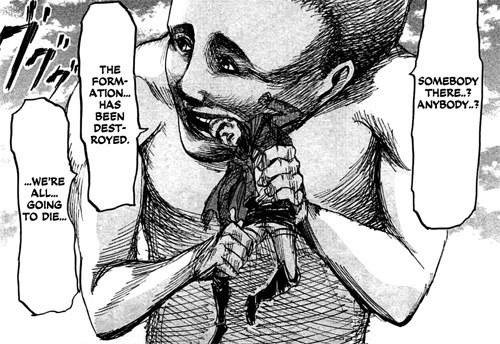 Let try to apply the Attack on Titans formula to other monsters to setup a monsters apocalypse setting.

1) Choose a monster from the monster manual.

I think that any monsters can work. For exemple, let choose the Manticore to create a Manticore-Apocalypse. It is a unusual choice, but I like the fact that this monster have a human male face, there is a creepy factor to exploit here.

2) Broaden some traits of the monster while keeping at least one trait that define them.

For example in Attack on Titans, titans are humanoids of different size. You have the "small" 5m class, the big 15m and the 60m gigantic class titans.

So to broaden the traits of the manticores, let say that they can be any beasts, not just lions. They all have human heads. And as time pass, they start mixing animal together and become hybrids (like the basic manticore). So they are hybrid animal with human male heads. I keep the fact that they have a human male head.

One of the main freaking thing about zombies and titans is that they remember us of people. Zombie were people and many clues hint that titans were also people. People turning into monster is a classic and effective trope. But the monster don't need to be human that turn into monster, it can be the other way around with monsters that mimic or gain human traits.

For the manticores, let say that is started with weird rabid animal attacks. Animals get mad and attack humans. Those who eat humans end up with the face of their victims. The human faced animals also eat other animals and mutate, gaining random animal traits (or maybe they gain new animal traits when wounded). Most of them have some sort of poisonous darts or quills. Even animals who get mad and attack humans are developing poisonous attacks. Being hunted by a pack of mutating dog-scorpions who wear your brother face is unnerving.

4) Give the monsters a trait that make them unstoppable but also give them at least one weakness.

So maybe the manticores are unstoppable raging berserkers that need to be hacked down to pieces. Or maybe they regenerate and grow new animal limbs when you wound them and the more you wound them, the more they grow bigger. The only way to kill them is to cut of their human head. Also maybe they are vulnerable to the venom of other manticores.

5) Give the monsters some behaviors rules.

In The Walking Dead, zombies are attracted by noises and can group in herds. Give your monsters some behaviors that the players can discover and maybe exploit.

So manticore have human male head. Maybe they can sense human males and hunt them to eat their face. Maybe they just kill human female but they stop attacking to eat human males. Or maybe they have different weird reactions toward males and females. Like they could hesitate to attack when they face females, but still get mad and aggressive once attacked. Maybe sometime they painfully try to communicate when they are alone with a females (but always fail). Also maybe their venomous quills and darts have different effect on males and females. They don't turn males into maticores but they turn them into raging berserkers. If manticore can sense human males, maybe males can also sense them.

6) The monsters are unable to communicate.

Maybe they are mute, dumb, feral, or overcome by emotions.It important at the beginning that the characters are unable to communicate and to understand the monsters. In the manga witnessing titans that show sign of intelligence or feelings is a very intriguing plot point. In zombie fiction it always strange to see zombies showing sign of remembering things. So at first present the monsters as unintelligent but later let them show some signs of intelligence, memory or of communication capacity.

7) The monsters predate humans and menace towns and even civilization.

Zombies and Titans feed on humans but your monsters can also predate humans for other reasons. Maybe to reproduce or to satisfy some urge or because of some overwhelming distressing emotions or impulse. Maybe it because their perception is twisted and everything they perceive is wrong or is aggressive to them.

Also the monster menace is hitting hard on civilization. Human are surviving, but they are on the defensive and things are looking grim for them. The monster apocalypse have hard consequences and is reshaping human society.

For the manticores apocalypse, few human remains and human males are getting very rare. Animals have become a compromised "technology" and can't be trusted or used safely.

8) Let the monsters changes and evolve.

For example, maybe the manticore start having different reactions to the manticore's venom. Maybe some of them start targeting human females or some of them start ignoring some human males or start avoiding some locations or get attracted by something. Maybe they start hoarding stuff or to reproduce by spawning new heads or maybe they start breeding.

9) There is rumors about unique specimens.

This is optional, but in Attack on Titans, the unpredictable appearance of unique titans is a major plot point of the story. So maybe it could be interesting to create some unique individual specimen to use them as plot devices and major events. Their appearance should not be trivial.

Maybe there is rumor about a female manticore or of one that talk and who is becoming a manticore leader (or is being worshiped by some humans).

A other trope in Attack on Titans is the monsters infiltrating the human society (like the cylons in the robots-apocalypse, Galactica). For manticore-apocalypse, we can have human cannibals that are in fact manticores who can infiltrate human settlements. They have hidden poisonous quills and can regen. But they most avoid getting wounded because their wounds risk of growing animal limbs.

10) Humans have organised themselves to survive.

Human have developed tactics and adapted their society to survive. Like in Attack on Titans you can create special tactics and equipment that the humans use to hunt the monsters. Maybe you can create some character classes that fit some special roles. Human society is also changing, maybe they live in special settlements and have new social classes, roles and occupations.

For the manticore apocalypse. There is maybe a special class of venom collectors or of manticore trackers. Gender roles have probably changed. Some class of people are maybe doing the work of animals. Or maybe that animals only go mad when they are close to different species (to go with the hybrids theme). Like if you have a horse your are ok, but if you have a horse and a dog, they will go mad, get venomous and attack you. So you have classes of people who keep different animals and who most never meet each others.

The GM can award XP for: 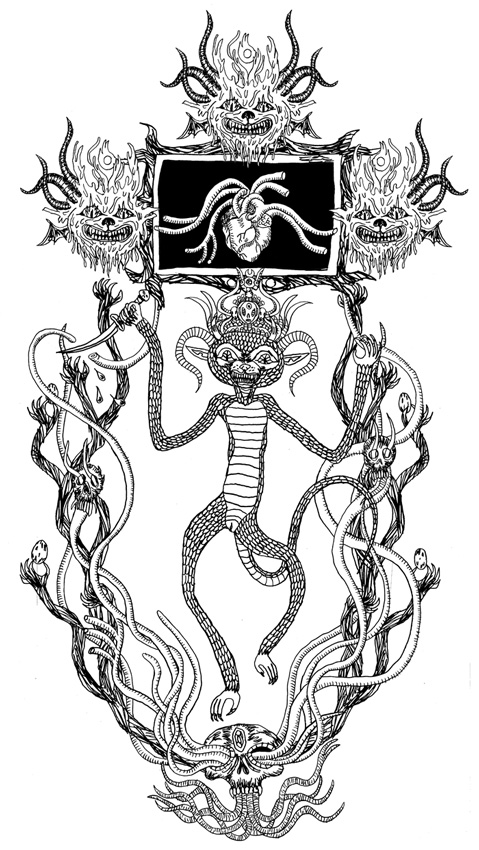