Cordyceps are mindless and giants ants are usually able to deal with them but once in a while a cordyceps fuse with the mind of a strong willed giant ant and develop the desire to create it own ever growing colony of infected ants. The Cordyceps Lord hivemind coordinate the cordyceps to try to infect the whole colony, if repelled by the ants the Cordyceps Lord retreat into a dark or damp place to build it own hive, from where it will ambush ants who pass by to infect. 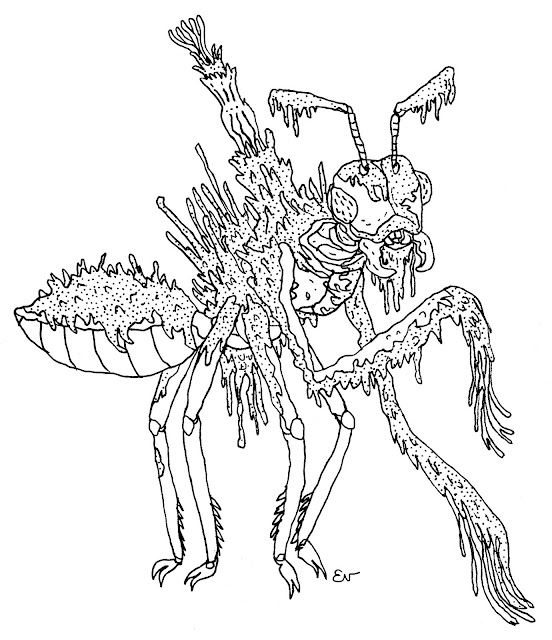 The other day I was watching a documentary about extincts giant penguins and I thought that the albino penguins from At The Mountains of Madness could be a playable character class in a old school lovecraftian setting like Realms of Crawling Chaos.

I image them as some kinds of eldritch Skeksis.

They live in the north in the ruins of eldritch cities. They organize in households and have complex social codes and rules for everything, they are craven and are obsessed with scavenging eldritch lore. Their large size let them use any weapons but they are quite clumsy with them. They prefer to live underground away from the bright light of the sun. 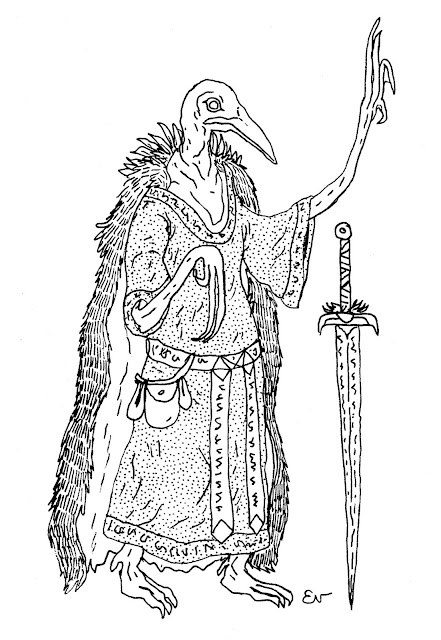 The other day I thought that allegories, like the ones we see in old editorial or propaganda illustrations could be fun to use as monsters. I was especially thinking about the more chimerical ones who feature multiple components that represent different things. Naturally this would work best in a surreal setting. 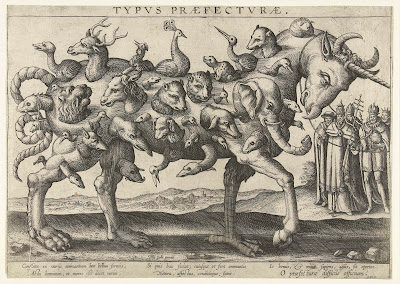 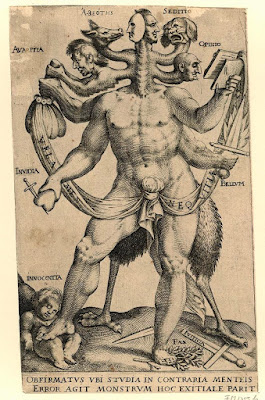 I remember that we tried to stat this classic one back in the G+ era. Imagine encountering it in a dungeon: (note the loot at the top) :p 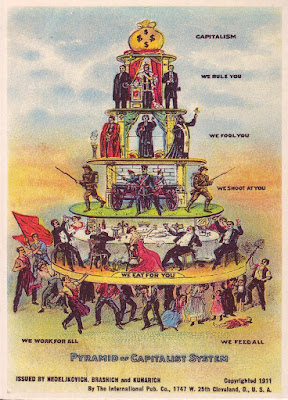 I tried to draw a obvious one myself, I like the potential for multiple attacks and for body parts to target and chop down: 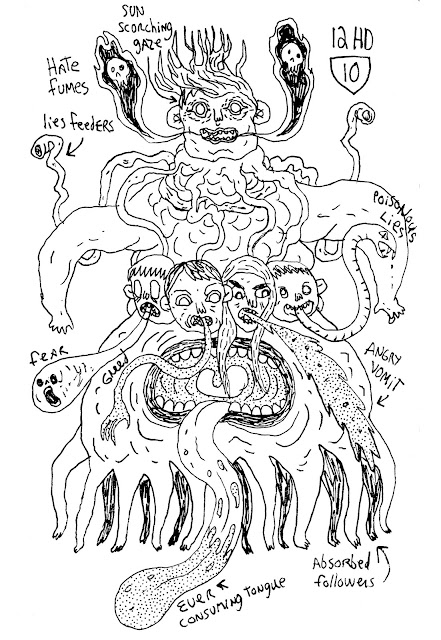 These are not for everyone and some of them could be problematic as they are inspired by real life. (But it could be cathartic to throw fireballs at some of them).

What coud be more interesting to do, would be to create a monster that is a allegory that represennt something within a campaign setting and to use heraldry and symbols from that setting to craft it. This could be used to put emphasis on the culture and the history of the setting.

Well this is probably not a very good idea but I like the part about underlining the history and heraldry of a campaign setting.
Posted by Evlyn at 9:02 PM 5 comments: 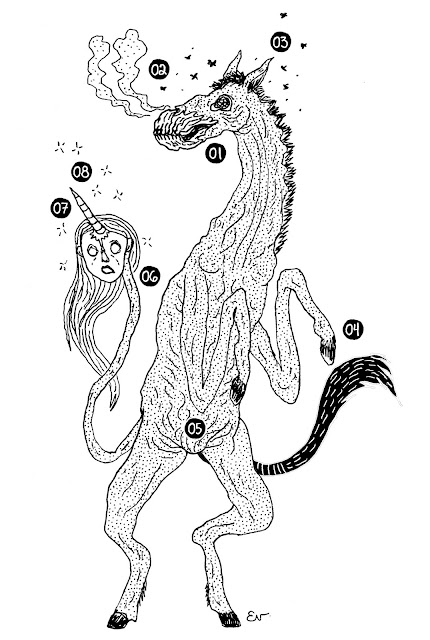 A unicorn who was cursed for using her healing powers to raise her maiden friend from the grave.

(01) Dreadful Equine Head
Devouring a human or equine corpse bring back the Cursed Unicorn to it full hit points total +1hp. The more it eat corpses the more HP it gain. Instead of doing it usual horn attack, it can bite for d6 dmg and inflict a disease on a failed saving throw.

(02) Bright Toxic Fumes
Instead of using it routine of 3 attacks the Cursed Unicorn can breath a cone shaped bright toxic fume. Save vs Poison or take d6 poison damage for 1d6 rounds.

(03) Halo of Lies
Flies buzz around the Cursed Unicorn head, if one enter into your ear it plant a lie in your heart. Save vs spell to resist the effect.

(04) Dark Hooves
They usually inflict d6 damages and leave a dark mark. But if the Cursed Unicorn recently fed on the corpse of a equine creature they do d8 damages instead (for one fight).

(05) Dark Womb
The reborn body of the deceased maiden rest in the womb of the unicorn. Striking it womb inflict double damages but will kill the maiden if the maximum damage is rolled. When the Cursed Unicorn is brought to 0 hp, the womb can be cut open to free the maiden. Once released the maiden is unable to breath and will suffocate in 2d6 rounds if no one kiss her. The person who do this will feel a eternal connection with the maiden and with unicorns (advantage to reaction rolls, feeling their pain and sadness).

(06) Maiden Head
The maiden is stricken with grief but friendly, she will try to warn people away from the Cursed Unicorn. She have no control over her movements and the unicorn use her to do horn attacks (d8 damage). If adventurers hit the unicorn, the maiden feel the pain and plead them to cease their attacks. She will also plead them to release the unicorn from her curse instead of killing it even if breaking the curse will destroy her chances of being reborn.

(07) Enchanted Horn
The maiden can use the horn ability 1 time per day to teleport someone away up to 360 yards. She will usually do this to prevent someone from being kill by the Cursed Unicorn's attacks. If the horn is cut from the maiden's head it can cure poison once a day. If someone is able to grab the maiden's head for a full round, she can use the healing power of the horn on them.

(08) Halo of Fireflies
Fireflies blink around the maiden's head. These hold her memories, if one touch your skin you get a penalty of 1 point to your next initiative as you receive a bright flashback of this memory. Killing a firefly destroy the memory it hold. Eating one make the memory yours. If all the fireflies dies the maiden will have lost all of her memories and her sense of self.