Reading scrolls don't usually require a test but if it would and you naturally happen to roll a fumble...

UPDATE:
Extra nastier effects that take the table to a d20

13. All non magical texts in a radius of d6 x 10m burst into bright blue flame and inflict 1 point of damage by level of the spell.
14. All magical texts in a radius of d6 x 10m cast the spell effect (targets are random).
15. The scroll summon a angry elemental of (d6: 1.parchment paper, 2.words, 3.ink, 4. strangling scrolls, 5. vellum skin, 6. of the nature of scroll's spell). The elemental have 2d6 HD.
16. The words written on the scroll spring to life and become nasty 1HD creatures. The scroll spawn (spell level)d6 words creatures. These creatures follow and harrow the group, hindering them at every occasion. They will attack anyone who attempt to read something.
17. The caster blood turn to ink, save or die. If the reader survive they now have magical ink blood.
18. The reader vanish forever and their name is added to the spell title. The spell can still be casted. (If Ezra casted Fire Ball, the spell is now named Ezra's Fire Ball. When a other reader roll this effect while casting the same spell, their name is added to the list (like: Ezra-Nathaniel-Irwin's Fire Ball).
19. The reader vanish and their life is transcribed into the scroll. The caster can be casted back to life as a spell of their own level.
20. The reader vanish forever and their name become a new word that everyone know. The player decide of the meaning. 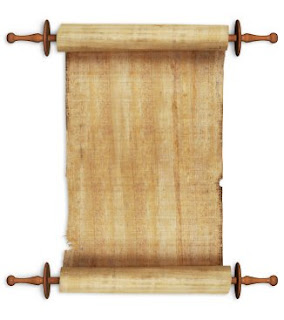 Email ThisBlogThis!Share to TwitterShare to FacebookShare to Pinterest
Labels: scrolls

Awesome stuff! I am going to link folks here this week on my blog and podcast.