Sometime ago a blue skinned teenager was found naked in a field, the villagers where not certain if it was a boy or a girl but they still befriended this strange kid. The blue teenager was happy for a while but a some horrible event happened and the teenager used their divine powers to save the village. Everything changed afterward, people started to worship the teenager, to fight between themselves to get his or her favor. The teenager was afraid as this worship brought back memories of their former divinity and the teenager wanted nothing of it. One day the tension between two factions of the newly formed cult fought together and someone was gravely wounded. The blue teenager had a meltdown, they curled into a ball in the grass and screamed "NO!", their divine power fully awakened and they transformed all the villagers into walls, rooms and doors that formed a house around the teenager, cutting them from the world. The divine teenager now hide the house, scared of what they have done and of what they are, afraid to venture back into the real world.

Maybe the blue teenager was a deity that fled their pantheon, maybe because they ran away from their divine duties, a divine conflict or maybe they decided to transition, it is hard to know...

Rumors now circulate about a abandoned village and a strange house that is sad. Some adventurers dared to venture into the house and brought back some treasures or strange tales. Maybe the characters had family or friends in that village. (If you are running a one shot, maybe they were former servitor of the blue deity).

The houses of the village are now abandoned. Some of them look like their occupants suddenly vanished. One small shed have been upgraded into a small house, gifts and offerings have been deposed around it but things of value have already been looted. Not far away from that small house, near the edge of the village, there is a large and strangely shaped blue house that have human like features. This house is the transformed villagers, inside the divine teenager hide away from the world. Anyone who enter the divine house is protected from divination and scrying powers, they vanish even from the sights of divine beings.

Maybe some vagrants camp in one of the village's abandoned houses.
Random vagrants (d8)
Random encounter while exploring the village. (d6)

Divine flashbacks about the village (d20) 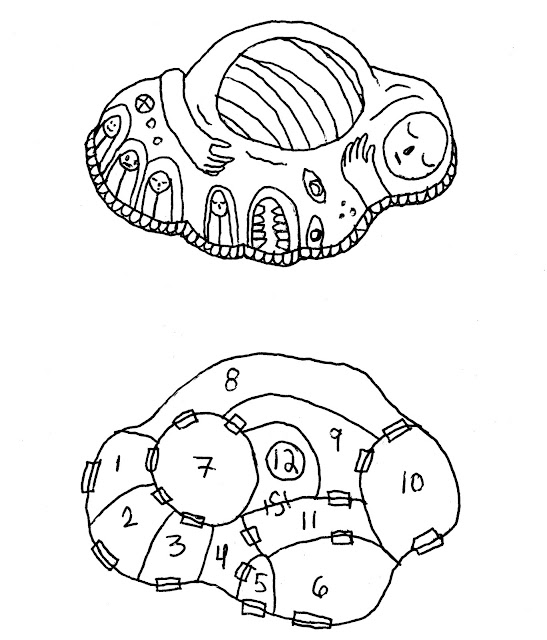 Everything that form the house was once a villager, the floor, doors, the furniture, etc..
These items are still conscious, most of them are asleep, interacting with them usually wake them.
Their memories are clouded, most of them think that they are dreaming.

If you need to know who was that door or chair before roll a d20 on the former villagers table.

The Rooms
The rooms are odd, they are a bit organic and feature element from different types of rooms. Think uncanny valley but for rooms. 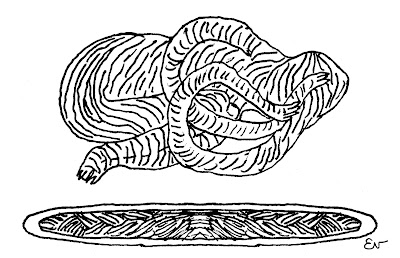 Divine flashbacks about their former pantheon (d12).
These flashback may happen in mortal or divine realms.
Use them to reveal or hint at the deity former pantheon. (Or their divine transition if you decided to explore that)

Fetishes (HD: 1 to 3, AC as chain, ML 9)
In it sadness the blue deity created fetishes that remind them of their former servitors.
These fetishes are the only animated items in the house, they slide on the ground like magical chess pieces. They protect the house and want people to remain away from room 12.

Random treasures
Treasures found in the blue house are physical manifestations of the emotions or memories of the villagers. For exemple, if a villager is transformed into a chest it will contain items representing his emotions, same for the items left on a table or in a drawer. These items retain their existence when taken out of the house. Touching the item for the first time or selling it can fill someone with the emotion or memory it represent.

When a characters search through a room let them find a few valuable items like these.

Worth (the more precious the stronger the emotion it represent)

absolute vibe I love it

This is one of the best dungeons I have seen in AGES. A++

really appreciate the melancholy tone of this little dungeon, and the story behind it!

I thought this post was really well done so I added a link to it in my BEST READS OF THE WEEK! You can check it out at this link if you want: https://bit.ly/36NS2SQ

Evlyn, I'm providing a hex map that keys to adventures I love for my Zine Quest game Wandering Stars, is it okay if I link to this post?