Chromatic Soup 03: The Sunset of a World

I decided to post the articles of Chromatic Soup 03 on my blog to motivate me to finish this project. I will try to compile everything into a zine afterward. 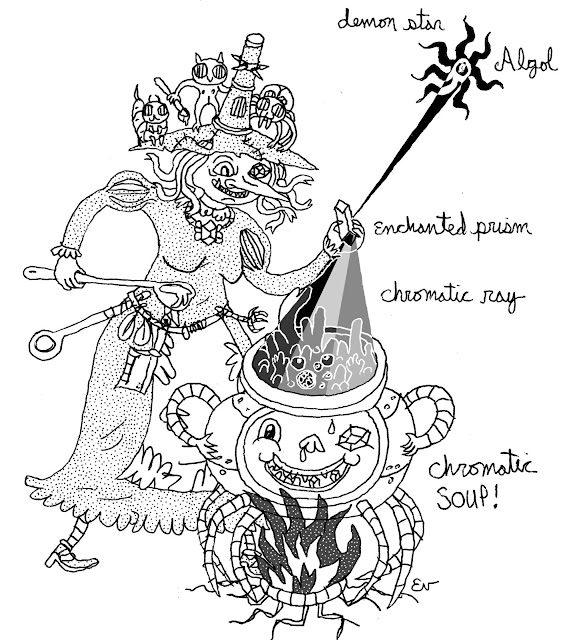 The Sunset of a World.

The gods are sunsetting their pantheons and the world. Free from their alignments, people and monsters are evacuating together. To reach new worlds they have to migrate across near infinite astral plains.

As the gods leave the world, no one is there to maintain the celestial spheres and the forces that run the world grind to a halt. Law and Chaos being gone, the world calcifiate and crumble into the void.

On their way out, the gods left the gates to the astral plains wide open. Passageways that were only accessible to the gods are now usable by all. People, creatures and monsters use old and new means to leave the world before the crumbling sun forever set beyond the horizon.

Creatures devoid of senses spill through cracks of the celestial spheres and harass those who linger in the dying world. In the astral plains, people and creatures assemble themselves into caravans, as they journey through the ever changing silvery landscape they encounter strange phenomena, creatures born between the worlds and other refugees. Along the way they must halt and take refuge in pocket worlds to rest and replenish their provisions. These unfinished worlds are too limited or dangerous, the caravans most venture again and again in the astral plains, their only true hope is to find a fully formed world.

Inspirations: The Banner Saga, Oregon Trail, and other stories about long migrations. Also the G+ sunsetting...

Setting up the campaign.

Start the campaign in a settlement, people are packing up, even local creatures and monsters are getting ready to leave. There is a lot of rumors going around about different means of escape.

Setup a short point crawl that point toward different means of evacuating the world. There should be one in the current settlement and rumors should point to maybe 2 to 5 other means of evacuation.

Other means of evacuation are 2d6 points aways.
Roll one dying world encounter for each days of travel. 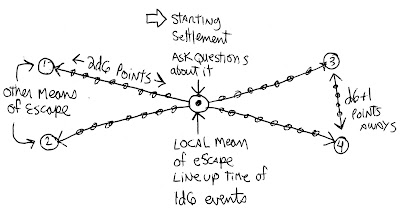 Give it a descriptive name like Calendra the Bright City and ask each players 1 or 2 questions about the settlement…
There is a local mean to leave the world here but people are crowding and camping around it, waiting for their turn to leave. Waiting without creating trouble for your turn to leave will happen after 1d6 settlement encounters. Naturally characters can try to find ways to cut the line.

You can also use the settlement encounters to note the passage of time when the characters do other things beside waiting in line.

NEXT: Means of escaping the dying world.
Posted by Evlyn at 12:54 AM

Awesome to hear that issue 3 is in the works. I was reading through 1 and 2 last night in bed. I find that I give my fantasy peasants a rural/backwoods/redneck theming rather than generic English peasant. So these zines are really helping me flesh that out in my head and weird it up a bit!

Keep up the good work.

I'm very glad that you're working on this. It keeps popping into my head randomly.

It's wonderful seeing these again.

I am so glad to see all these things again! Working on this was wonderful!