Some time ago, I played in a game of Death is the New Pink with Max V as the GM.

It was fast, brutal and fun!

Max presented us a premise of his own and asked us a bunch of questions to define more his premise and to setup the game.

Our characters were from a tribe of survivors who lived near the acid ocean. The water of the bay near our village is full of pink micro organisms that neutralize it acidity but also dye everything in pink. We call the sea "Betty". Our tribe make a local sacred elixir made of Coca Cola and LSD that we give as a offering to the Nasty Tribe. Oh and we craft nearly everything with giant crabs shells.

"Giant crabs shells are the basis of our civilization," -Sonny
Jellyfish (my character) pass her time on the beach with her little brother, fishing and scavenging ship wrecks. She worship more Betty than the sacred brew. Her feet and hands are dyed pink due to the micro organisms.

The other meat bags were:
A big cruise ship drifted in our bay, guided by Sonny, we decided to explore the ship wreck in hope of finding more Coca Cola for the sacred brew.


We explored the shipwreck like in a dungeon crawl, there was a lot of weird stuff inside. Two characters mutated when they explored a strange escape pod.
Jellyfish decapitated a cyborg with a uppercut and finished a rude psionic squid with a punch through it eye. Constant optimism is the best trait.
She escaped alive with her little brother and a shitload of coca syrup and drugs. We lost one character during the expedition to a gatling laser gun (Pinky) but the character was quickly replaced. 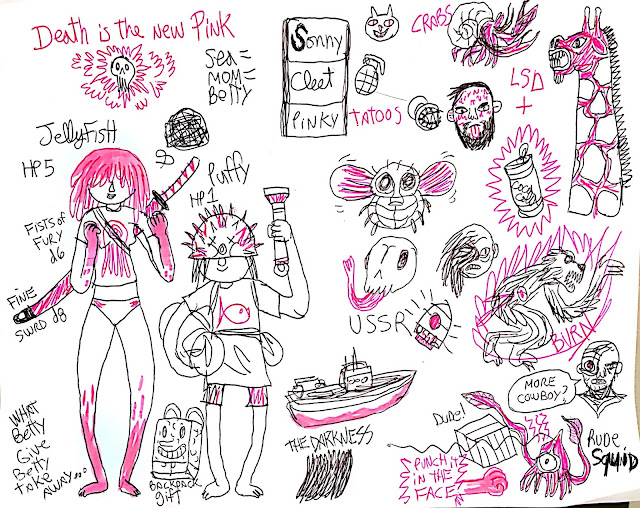 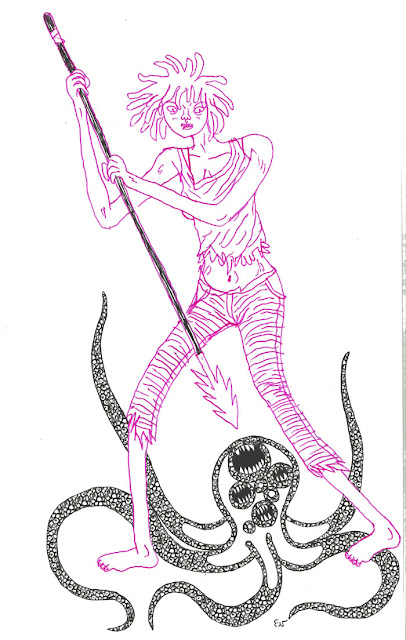 You're my favorite rpg artist right now; I always keep coming to see what you draw next.

I'm familiar with the Into The Odd rules. Are fists of fury and constant optimist something like "special powerups" or something?

Fists of Fury are a special powerup but constant optimist is just a random roleplaying detail but I had a lot of fun with it.