I was so frustrated with my work day, when I arrived at the game table I was simply unable to roleplay. I tried to play but I was starting to troll the NPCs. So when the group left for the zone I said: look when I am in this mood I fear to sabotage things, so I will just sit this one out. My character will remain at the Ark and I will just listen to the game instead of messing up my character or the session.

So what happened in the fiction? We worked on the Ark's projects. Clarissa and Allia tried to build some barricades, but there was a work a accident and the slaves were angry and they made no progress. Brando worked on the temple and I made some deals to finish the fighting arena. We named the arena after Otiak (our first but memorable character casualty).

After that I started to spread lies to make some NPCs hate each others but I stopped myself before going too far and getting out of character. I guess it was a bad day of Fillix.

The rest of the group decided to follow a rumor about a stalker who became mad in the zone. They filled up the car we had found with booze and ventured into the zone. The group fought a giant worm that nearly destroyed the car. But after studying it, Brando spotted it weak spot and nearly killed the worm in one mighty blow.

The group arrived at a old factory contaminated with giant fibrous mushrooms. They were brave or foolish enough to venture inside to find what happened to the mad stalker and to look for artifacts.

They were lucky and they found two "metaplot" artifacts: a key card and a video camera. But Brando and Allia got infected by the spores. They felt weird on the way home but nothing happened.

Just before reaching the Ark they encountered a group of women mutants slavers armed with good quality riffles. They asked about the male mutants that we rescued in the zone. The group sent them toward a other direction. Both side were pretty suspicious of each other. Interesting.

So in the end it was a interesting session. I am glad that my bad day mood did not ruin it.

I have spend 5 xp on Juna and the trait admirer to develop what have happened between her and Fillix. I was not in the mood to explore this during this session, but still, things are building up. 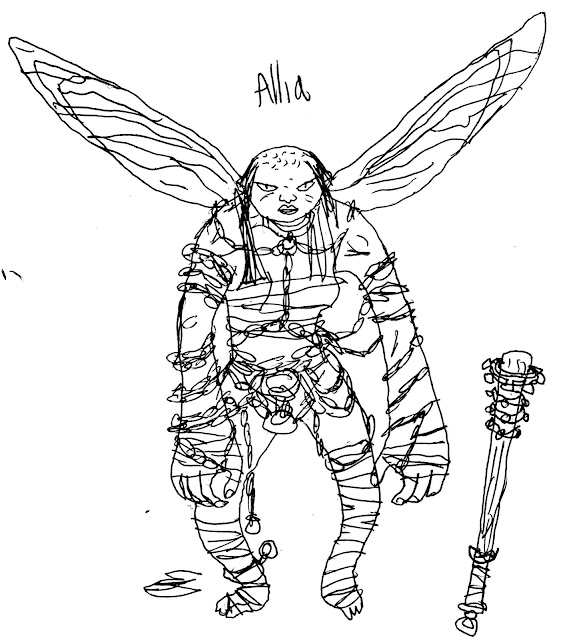 We moved our gaming night and I was in a far better mood this time.

Brando the Bear Warrior spent some of his XP to become a Boss. So now he have a new role and gang of animals. He only have 2 points of wits to roll his command skill, but I really like this character development. I am looking forward to see if Allia will also change role to eventually become free.

During the hall meeting, Zidane, the animal seer, proclaimed that the temple should be dedicated to the Elder Humans. Clarissa and Brando were not happy about this because seeing the weak humans that we have rescued from the zone cannibals made them realize that we can only count on ourselves to find our place in this rotting world. On my side Fillix tried to publicly undermine Boss Astrina and her politic of self isolation from the zone.  I also managed to get involve in the temple doctrine by showing a elder chronicle I had found in the zone: The Chronicle of Narnia. Astrina and Zidane were quite upset about this. :)

But them the earth shook and a portion of the Ark crumbled down in the earth. The group went down to see what happened. Astrina sent my chronicler lover Juna to report on the events. I tried to move Astrina away from the elder room persuading her that as the boss of the Chronicler she had to see this event with her own eyes. But she was too chicken shit to venture away from her precious elder. So I decided to remain on the upper deck of the Ark to spy on her. Since I could not sneak into the room of the elder I sneaked into Astrina's room and I stole a old photography of the elder wearing a strange yellow suit. It felt weird to imagine him young like us. 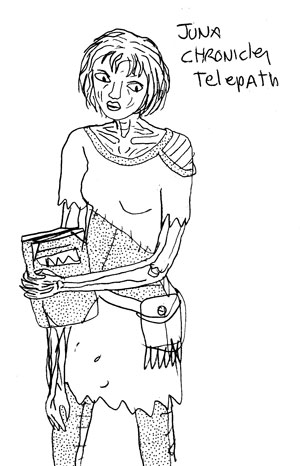 Down in the ground, the rest of the group found a old tunnel that lead to a secure high tech door. Clarissa opened the door with the key card they had found in the zone. Inside everything was old and rotten. By the time they reached the inner room, I managed to get back to them with the help of a NPCs mutant. 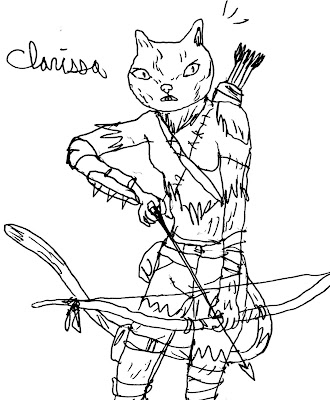 The central room was protected by two half disabled robots! The robots shooted at us with laser beams! Allia and Clarissa (with a amazing bow shot!) destroyed one of them but Allia went down, then Brando and Clarissa! I used my mutant power to transfer my life force to Allia. Doing this taxed me too much and I also went down but Allia was back in action! She damaged the remaining robot and Spoutnic, one of Brando's gang member finished him off. This was a close one. :)

I really like how the stats degradation really balance well itself. The robots had super dangerous weapons and armor, but they pushed it too much and it quickly degraded, giving us a chance to take them down. Clarissa also went down by pushing herself too much. We thought that Allia was invulnerable with her "shake it off" trait, but one bad roll and she also went down. Having to roll 6s for success make even the big pool of dice unpredictable. You can't really trust your abilities all the time, they will eventually fail you. It could be annoying, but this work very well with this setting.

We explored the rest of the bunker but we found nothing of interest except some old batteries. It seemed like the bunker was never inhabited. This fueled Fillix's curiosity about the elders.

The gearheads salvaged the place and the next day we worked on the Ark's projects. We made some progress on the fortifications. Brando started to train a milice. Allia helped to build a tavern but the place is a crappy hole and our culture only raised by 1 point (on a d6 roll) 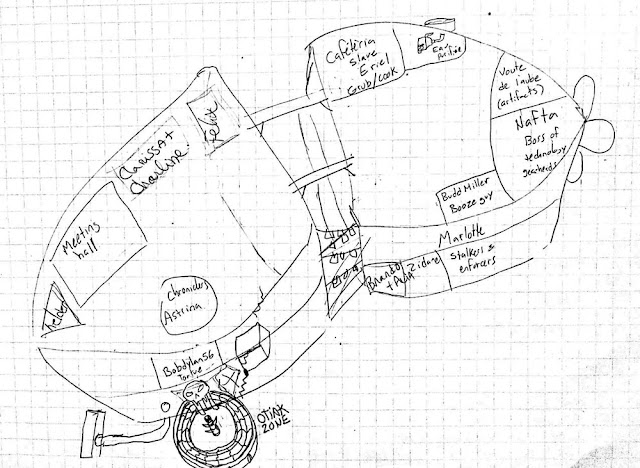 I made a 6 xp points of of 7 possible XP rewards! So Fillix learned a lot of thing. I want to tone down a little bit my selfishness and I am thinking of spending some XP on Read Emotions. I want to get closer to Juna, Astrina and the Elder. The fight also made me realize that I need a long range weapon, so I am going to spend some bullet on a scrap rifle. 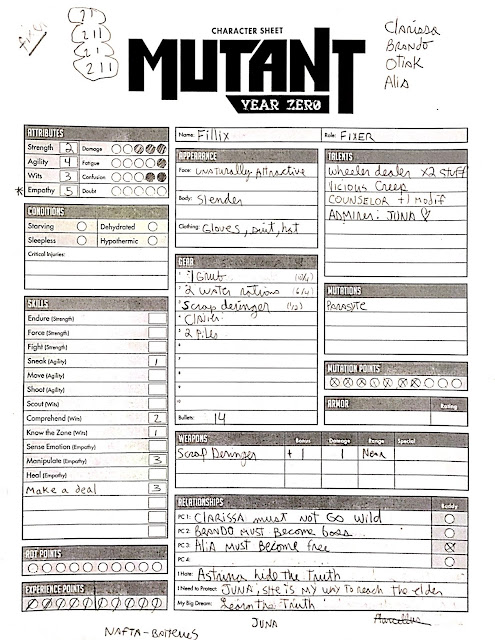 that's great. I'm curious to see how the metaplot will develop. And it's cool to see you have the self awareness to sense you were not in a good mood and avoided anything harsher.