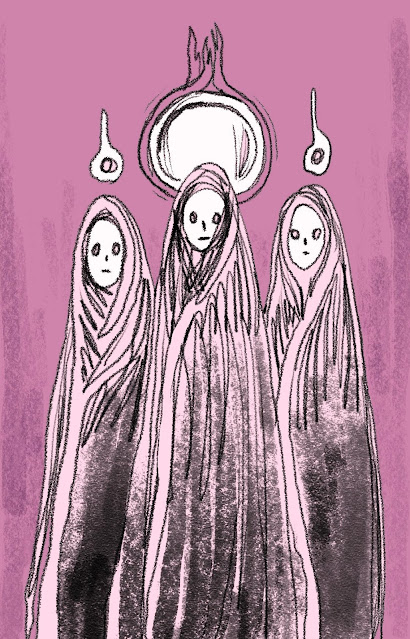 Genderless, gentle, soft spoken and caring, the three wise necromancers are looking for the incarnation of an important religious figure and they come seeking the figure's blessing. The twist is that this religious figure can only be revealed after being raised from the dead and brought into unlife. Their gifts are compensations for bringing someone into unlife. People, who are not the prophet they seek, come back from the death with a vision or a few words that will guide the Necromancers toward the mysterious prophet's time of death. Sometimes they visit people who are getting close to their death, when they do they may want something in exchange of their gift, they never ask, but you always know - you just hope that you won't feel it when they bring you back. The people from the hills say that you don't have to take their gift and they'll never force you, but they only come when they have exactly what you need or exactly what you want. People from the marsh say that one brings good advice, one brings fresh fruit and the last brings tea.

Folk tales from the river towns say that if you put the kettle on, they will sit with you and share tales about undead people they know or that you once knew. How to use them in games?

Written with comments from Marielle, Fred, Mystic Dan and Fighting Man.
Posted by Evlyn at 11:14 AM

"Their gifts are compensations for bringing someone into unlife."

This line is so good. What a great post! And the art! Aaaah.

Wow these three are amazing and inspired some brain storming this am on how they could be used to foreshadow a scene or arrive when a character dies in a DnD game. What will they offer in terms of advice? Will the tea and fruit be inevitably bitter, sweet or both? So good.