Instead of collectively keying a map we tried to key together a character class.
(This is not balanced, it probably require some jerry rigging to be fully playable) 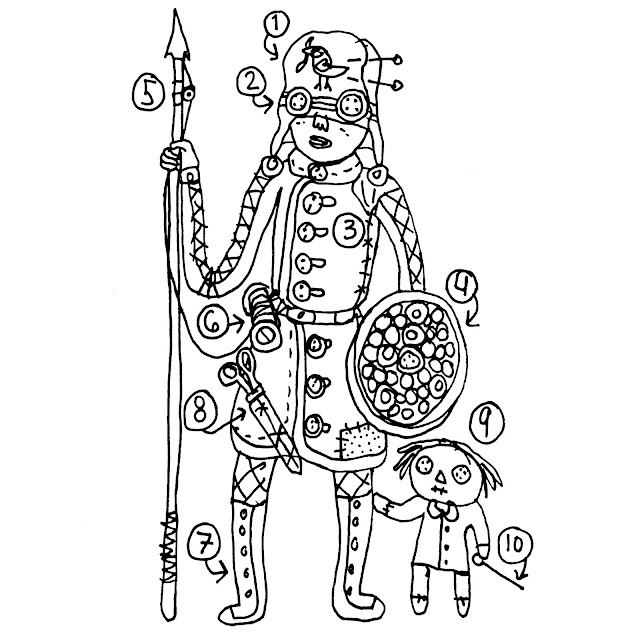 Wanderstitches start with two abilities at level 01 and gain a new one each time they gain a level.

(1) Wanderstitch household hat - Traditionally hold two stitching needles gifted from your household. Wanderstitches trade these to make alliance between households. A household needle grant a advantage to craft a particular kind of item, like House Nest Maker are the best for crafting blankets.

(2) Prismatic Buttons Lenses - Gives advantage to spot hidden. Once per day the wearer can see through normal or magical obscurement. These are crafted with buttons found in a dark place.

(3) Proving Buttons - While apprenticing, a wanderstitch takes only a button as payment. Once they have enough to finish a coat of their master's design, they may seek their own destiny. Wanderstitches can read each other's deeds in the buttons they collect. Spend as social currency (double or halve efficacy based on relevance of origin).

(4) Baubleshield - If the light is right it has a dazzling prismatic reflection, very disorienting. Can be repaired by adding baubles found during adventures. Select again to enchant the shield with a luck charm, each bubbles added while adventuring grant a one time lucky armor bonus of 1.

(5) Tethered Spears - Whenever you use throwing weapons for attacks and miss, you can always pull them back to you as long as it's not over the weapon's range. These spears can also be used as giant needles to stitches the clothes of giants (who have a hard time repairing their clothes with their clumsy fingers).

(6) Heartfelt Thread - This spool's thread can only be broken or cut by someone who has a true and abiding passion and only in the service of that passion. If the thread pierces someone's flesh, it winds through their veins deeper and deeper with every lie and mistruth they speak. This dangerous ability can only be selected after reaching level 03.

(7) Foot Training - Complex garments or spellweaves often require many hands. In a pinch, wanderstitches often train to use their feet. (Advancement: use feet as disadvantaged hands. Choose again to remove disadvantage)

(8) Cut the Weave - You can craft witch-scissors. With them in hand, forgo your attack to gain advantage on saves vs spells. If save succeeds, the spell is nullified. Spell-offcuts are volatile but make good barter. Witch-scissors lose their power if used to cut anything else.


(9) Animate Doll - Sometimes when children grow older and keep their childhood toys, their parents decide to get rid of them. By sewing the right button on a discarded doll a wanderstitch can animate it. Select again to create additional doll companions.

(10) Doll Weapon Needle - As literal toys the doll weapons aren't particularly lethal but they are very distracting and annoying. Certain unexpected creatures are said to be quite vulnerable to the weapons wielded by dolls, however. Any one poked by these weapons must pass a saving throw or cannot stop saying "OW!" until end of day.