I was rereading some old blog posts that I removed for personal reasons and I thought of rewriting the campaign setup that I wrote to play a coven of witches. To do so I want to get rid of the material linked to the LotFP book Vaginas are magic (VAM).

VAM could have easily been trans inclusive, I mean magic... you can easily writestuff to include trans women. This is a book about spells, you can even write a transition spell (even with all the nasty miscast effects) and add it to your spells list. Or you know, you can simply avoid writing that vaginas and fertility are the only ways of defining womanhood in your magical cosmology.

At the time of publication of VAM, some of us defended VAM by saying: "the book don't have to include trans women, this is the OSR, you can simply hack who can cast these spells or devise your own magical means for trans women to gain a vagina and a fertile womb if they really want to cast these spells." And at the time I was feeling uncomfortable but I thought: yeah I guess this is the OSR way of resolving problems…

At that time I was really trying hard to like VAM and to continue to like LotFP, I even ran a campaign entirely built around VAM. But as I took some distance from my initial love for LotFP, I saw how trans exclusive and shitty the game text of VAM was. Looking back on how I was ok with these excuses, I cringe a lot at my past self.

The text of VAM present the spells as women's magic and state that you need to have a fertile womb to be able to cast them (the book title also imply that you need a vagina).

"Now about this “only women can cast these spells”
thing. When creating new spells, It is perfectly fine
to say that certain spells can only be cast by one sex,
or people with brown hair, or people with no eyes.
Or by those in certain moods, or who are wearing/
not wearing jewelry or clothing made of certain
materials, or who are covered in squirrel shit. It can
be that arbitrary, that simple. If a caster wants to use
these spells without the specific restriction, she can
recover a spellbook with the spell in it and research
her own version without the restriction. Spell
research rules aren’t just there to fill out a page count.
For the purposes of being able to cast the spells
in this book, “woman” is defined as someone (or
something, non-human magicians can cast these
spells too) able to be impregnated and carry a child to
term. Is a character Postmenopausal? Prepubescent?
Infertile for any other reason? These spells are not for
them. Exceptions are made for those normally barren
if they have been infected with parasites which are
then naturally expelled through their normal birth/
life cycle.
Yup, these spells will have players of male Magic-
Users (and old crones, and etc.) begging you to run
Alien for them, just so their characters can get face-
fucked. Isn’t gaming grand?"
-VAM

What I get from the text is that in LotFP, the cosmic magical forces of the universe align with some of the arguments that TERFs use to exclude trans women. If I play a trans woman, VAM tell me that my character need to get impregnated by a alien parasite for the magical laws of the universe to consider her a woman or that she need to do some magical researches to rewrite these spells so that a “non woman” can cast them.

Again with all the trans people playing and creating gaming material in the OSR, I think that our allies can show more creativity and do better than this. 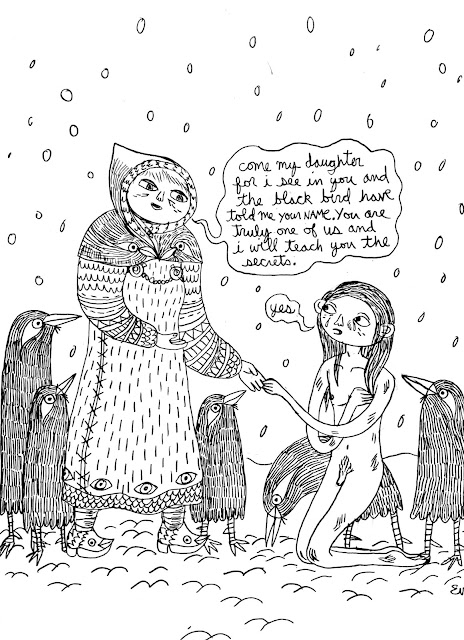 The characters are all witches (magic-users) and they are all members of a secret coven that researched the dangerous spells list of a long dead Elder Witch. Something happened and the coven have been recently dismantled, the player characters goal is to rebuild their coven and to find a way to deal with what menace them. While doing so, there should be plenty of opportunities to impact the campaign's setting.

The campaign can be run as a sandbox build around a small town and a situation that is affecting everyone in the area. The player characters could first try to find back their former allies and resources, then personal goals would surely emerge and the game could become more about dealing with the big situation (or other emerging stuff). Naturally dealing with the legacy of the Elder Witch and other supernatural elements will come in to complicate everything.

The Elder Witch should have lived some generations ago, she was a brilliant witch that grew obsessed with her magical researches and accessed dangerous planes of existences. After her death her spell book became a precious artifact, copies were made but errors slipped in. The original book eventually gained a “soul” of it own and became a magical entity, a bit like the necronomicon in Evil Death but maybe more alien than “evil”. Finding back the Elder book is something that witches booth desire and dread.

Keep the Elder Witch history vague and shrouded in mystery and rumors, give her some scary traits but also some positive and relatable ones. Echoes of herself still survive, trapped between the planes, she feel anger and regrets, her feelings are conflicted, maybe she can be redeemed or maybe not.

The Elder Witch discovered a plane of existence that she explored until some of it secrets consumed her. This plane have it own ecosystem and rules, think of the Upside Down of Stranger Things or the Otherworld of Silent Hill.

Her spells are about accessing and manipulating the energies of this strange plane, define the plane and maybe around 10 spells to start with.

A part of the fun of the campaign is to see how much the witches are willing to use these dangerous spells and how using them will affect and impact their live, their world, the plane and reality itself.

You will have to hack a bit the game system that you use. Character of any levels should be able to cast spells of any levels. Spell of higher level than your own should be more dangerous to cast.

When casting a spell, a witch need to make a saving throw, depending of your system, greater spell effects should be harder to save against. On a failed roll the witch lose control of the spell and she must roll on the miscasting table. There is also the possibility of casting spells when you expanded your magical spell slots for the day, this should automatically lead to a roll on the fumble table.

The conditions in which a character is casting a spell could also impact the miscasting save. But keep in mind that casting spells should always involve some risk.

The referee should name the town.
Go around the table and answer these questions together.
If a question don’t inspire you, pass it to the next player.

The game will be mostly about rebuilding the coven…
Go around the table and answer these questions together.
If a question don’t inspire you, pass it to the next player.
Personal questions for each characters
For transgender witches 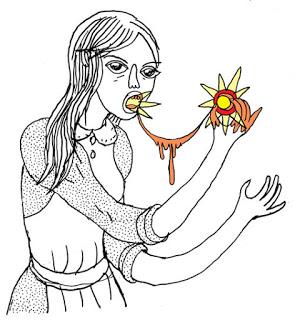 Thanks Emmy, I have so many campaign that I want to run. :P
I will let you know if I ever get to this one. :)