Using the Insects from Shaggai in a fantasy setting.

Campaign premise:
The player characters are young from the same village, they will be soon initiated into the local cult. Years ago the insects landed in their temple ship, they domesticated the more useful monsters to use them as servitors. This was a good thing at first, while the woods gained the reputation of being haunted, the area became more peaceful. But soon the insects implanted their cult into the local human populace. To answer their need, the insects taught some technological innovations to their cultist while carefully controlling the villages' populations. The lands around the landing area became a sacred and forbidden place. Thing would go well but factions among the insects have different plans for the villagers. There is also these foreigners that were found in the woods, near the forbidden lands, a family is healing their wounds but the foreigners sinful influence have already infected some of the young, they call them adventurers.

Alternate option: the players play a group of adventurers who stop in one of the cult's villages. They are probably seeking something in the forbidden area. Young befriend them while local families want to use them to achieve their petty ambitions. The insects don't care about them at first but once the adventurer get troublesome, the insects will want to control them or may have other uses for them depending of their faction.

Alternate option: the players play the insects. This option is naturally harder to play but quite tempting. The player characters are insects who fused with the mind of villagers to influence their community. Since their fused mind tap into their victim memories, this help the players make sense of their characters (vs playing truly alien ones). The insects have to deal with rival insect factions, their servitors becoming more erratic, the petty ambition of the villagers' clans and the presence of adventurers. 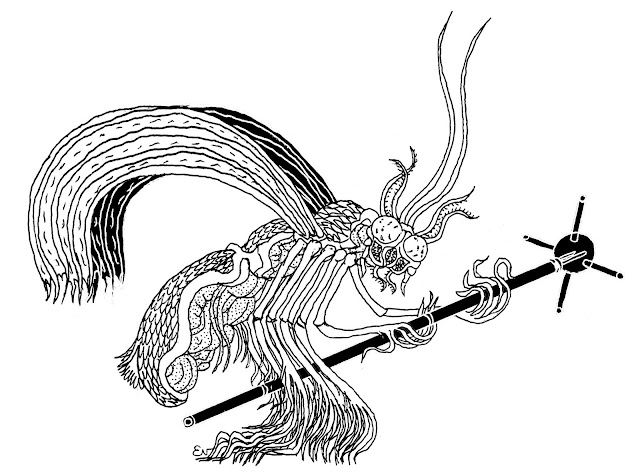