StoneHell and the power of losing your helm

With my Thursday group I played my first session of Dungeon Crawl Classic with Vincent Quigley as our new dungeon referee.

We rolled up our group of level 0 adventurers and we had a great session venturing into the StoneHell valley.

We had 16 characters, only 5 character died, I was expecting the funnel to be more deadly. But we scouted the valley and we dint really venture into the dungeon itself. Exploring the dungeon would clearly had produced a deadlier and greater funnel. But still, the funnel worked and I already have 3 favorite characters: A clever 1hp merchant, a crafty dwarf mushroom farmer and a clumsy squire.

Vincent house ruled that we could sacrifice our character helm to avoid taking damage from one incoming attack (3 characters started with a helm). This saved the life of two characters. I found the house rule colorful and very interesting, it remembered me of the warrior special ability in Stars Without Number. 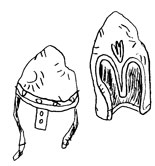 I am tempted to also use this house rule in my LotFP campaign. But tweaked a little bit.

Like: once by session you can sacrifice a major piece of equipment to avoid the damage from a killing attack.

You can sacrifice:
But you are also stun for d3 round (maybe a saving throw can let you avoid the stun).

EDIT: well I am still thinking this over.

The helm rule reminds me of the "Shields Shall be Splintered" houserule. "...any time you take damage, you can opt instead to say your shield absorbed the force of the blow. The shield is shattered and must be discarded, but you don't take any damage from that hit."