Goblins collectors are remnants of the great myconid war. They were created to assimilate goblins and convert them into fungal drones. But these walking fungal mounds developed a symbiosis relation with the goblins they assimilated and started to lovingly collect them. They became protective of their assimilated goblins and refused to put them at risk. Their myconid handlers tried to get rid of these montrosity by poisoning them but the mutant goblins they assimilated helped them to develop a immunity to the tailored poison spores.

Only a few Goblins Collector survived the war and the myconid purge, these colossal fungus live a nomadic live, travelling between caverns that are large enough to accommodate their size.

The symbiotic goblins work well together and are good fungus collectors. They live in the birthing chambers situated in the hunchback of the Goblins Collector, some goblin build crude structures on their collector.

The birthing chambers are interconnected by a network of passages and secondary chambers that ressemble a small caverns network that can be explored like a dungeon. The connecting tunnels being goblin sized, most adventurers would have to walk on their knees to crawl through them. The symbiotic goblins take good cares of these chambers and will hunt any parasites that tries to settle in.

Other goblins tribes respect the goblins collectors because they usually travel in the periphery of their tribal territories and serve as a border patrol. They are tolerated since they are too big to venture into the tribe's tunnels, a few goblins get assimilated by the collector, but this is ok, in a sense these goblins are only joining a new tribe. 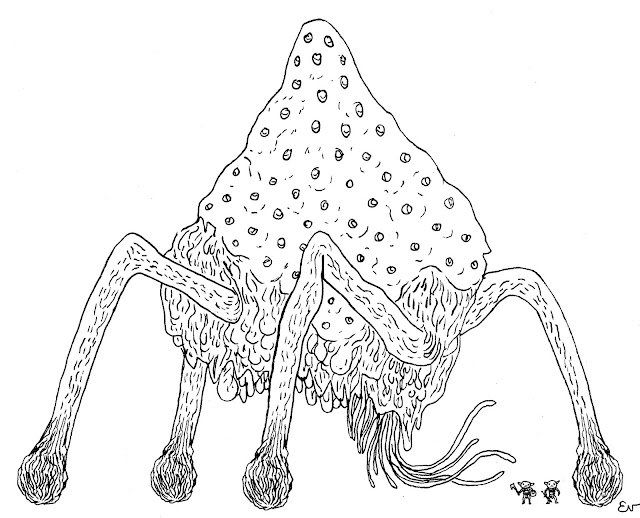 Goblins collectors have between 6 to 9 HD. They slowly regen HP by eating fungus or by assimilating goblins (and other beings).


Collectors are accompanied by a d6 of goblins for each of their HD. The collector lose a HP when one of their goblin die. 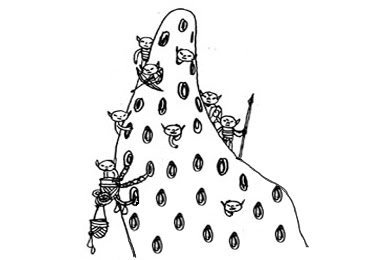 Creatures killed by their pseudopods are ingested, then digested or assimilated.
Goblins will always be assimilated and heal the Collector by their amount of HP.
If a adventurer get ingested and make a constitution save, they are reborn 2d6 turns later into one of the birthing chambers of the hunchback.

Roll a d12 on the goblin rebirth table (goblins roll a d8):

This is a wonderful ecology!

It is both cozy and full of a scary origin fantasy at the same time; a curious combination that reminds me of Ghibli or Fern Gully. I love it very much. The creation of the beast is monstrous and warlike but the calm, slow plodding of their new lives (and the tender care of their family of goblins) is so peaceful and friendly.

I think that is a very lovely blend!

This is really good, I'll definitely use someday at my table!

This is exactly the kind of thing I need to populate the Underdark of my D&D setting with!