The wyrd tongue that walk on three legs 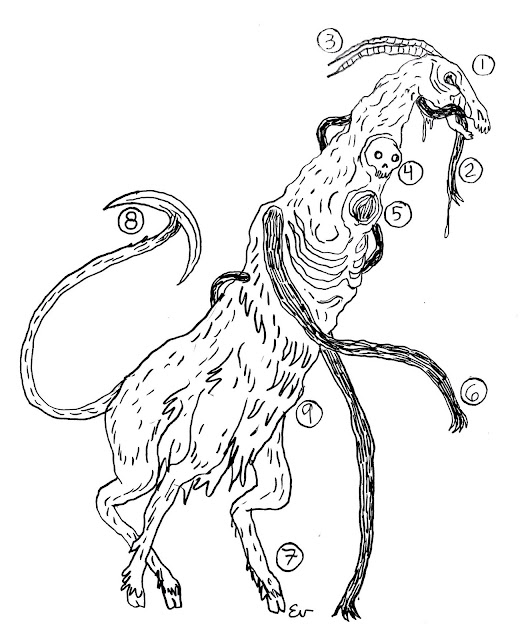 The creature is the divine child of a satyr like deity and a shadow that nested in the shimmering realm. One legend say that the creature was conceived when the satyr god seduced one of his priestess while she was possessed by the shadow. A other story say that the satyr goddess and the shadow felt in love but that their union and their offspring was cursed. Satyres try to ward off the creatures, some want to hunt it, other respect it divine heritage and secretly seek it blessing.

(1) Wyrd skull
The divine offspring is blind and can only perceive beings who memorized spells, it often use it shadowy hands (6) to feel it surrounding. The wyrd skull can cast spells stored in the skulls of wizards, see (4) and (5).


(2) Torso-tongue.
These organs detect changes in kanna or magical energy. In this way the creature hopes to be lead back to its distant home where color has its origin, and where even the least creature lives on kanna.

(3) Veil tearing horns
These horns can tear through shadows, illusions or beings made of pure light or colors.

(4) Head receptacle - Decayed skull
The divine creature eats wizards, absorbs their heads into it's body. The head is still alive in a semi-comatose state, conscious of what happens but without free will. The goat can cast any spells the wizard had prepared at the time of digestion. Once expended, the head decays into a skull.

(5) Head receptacle - Empty
When empty a head receptacle can absorb a first or second spell and hold it to digest or release it later. Piercing the creature through one of it empty receptacles do a extra die of damage.

(6) Shadowy hands
The divine child have long shadowy limbs that can stretch to grasp preys, within 15ft, no save is possible against their grasp. Their grip cannot be broken and the limbs cannot be cut. The limbs may be severed by tying a red ribbon around them. A severed limbs act autonomously and will meld itself to the nearest living thing, they favour ankles, wrists or necks to attach themselves.

(7) Triplicate goat-legs
They allow the creature to mimic the footprints of pair-bonded satyrs to avoid being tailed by hunters (or the satyrs themselves).

(8) Tail slicer
In addition to doing a small bit of automatic damage to anyone who flanks or backstabs, it has a small chance of severing the silver cord of anyone spying on it from the ethereal plane. The creature itself is not conscious of other planes, but the slicer knows.

(9) Shimmering fleece
The fleece shimmer near kanna leylines. Legends say that if woven into a garment the fleece can protect it wearer against magical attacks.
Posted by Evlyn at 12:39 AM

Weird! This is awesome.