The last trailer of Cyberpunk 2077 and it in-game advert depicting a trans woman showing off her HUGE cyberdick with the slogan "MIX IT UP" made me think about the cyberpunk genre and about transgender representation.

I revisited some relevant articles like Why ins't Cyberpunk Better at Trans Representation? and "Is Every Woman Here A Sex Change?" - Trans in Cyberpunk RPG.

There was also some discussions online about Cyperpunk 2077, some of them, where people were not super defensive, were interesting and made me want to respond in the classic OSR/DIY fashion: by crafting my own thing, so I started working on a trans positive Cyberpunk zine.

While working on my zine I acquired a bunch of cyberpunk inspired OSR publications and I used the PDF search function to check how trans people are represented in them. Since there is a lot of trans people in the OSR scene, I was wondering if the representation would be stronger and more positive or creative.

There was no results for the words sex, trans and gender in these publications, except for Cyberpanky NOW, Polychrome and Augmented Reality.

In Cyberpanky NOW there is a gender identity table that you can roll on when you create a character:

If you use this table, your character have 40% chances of being trans and 80% chances of not being straight. This is kind of interesting but there is no other context and this is the only place were the word "trans" is mentioned.

Polychrome have "biosculpts" and mention that gender reassignment is relatively simple.

Polychrome also mention the existence of "other" genders but they are relegated to sex work.

"The Nightingale: On the surface, the Nightingale is a typical,
slightly upscale underhab knocking shop, with the almost 100%
artificial madame Miss Cecilia overseeing a stable of men, women,
and other genders available for varied entertainments."

And then there is the notion of cyber ninjas undergoing biosculpting gender reassignment to better approach their target.

"Some specialists take regular biosculpt jobs to alter their
appearance and gender so as to optimally appeal to a target, getting
close enough to execute them in an unguarded moment. These
“Judiths” or “Judies” can easily command as much as 50,000 credits
for the successful assassination of a mid-level corp manager."

Undergoing gender reassignment procedures just to better approach a target is a pretty problematic trope, I guess that cyber ninjas don't really care about their gender because ninjas only exist as assassins, not as people. Maybe only gender fluid people become cyber ninja, but the text don't go there.

Extinguish the Sun #02 don't feature anything trans related but it credit two trans women: I did some commissioned artwork and there is a character class written by Fiona Maeve Geist. There is also a interview with Daniel Sell who mention that he often work with queer and trans people.

"HOW INCLUSIVE DO YOU THINK THE OSR COMMUNITY IS AS COMPARED TO TABLETOP ROLE-PLAYING GAMES AS A WHOLE?It’s inclusive for sure, but compared to games as a whole I have no idea. As a rule I don’t engage in the broader community; I’m already too busy and I don’t need to deal with rubes on top of that. I work with more trans and queer people that not, and am openly gay myself, but I don’t seek them out.Most people I work with come to me with their projects in hand, or I find them because I know I’ll enjoy working with them."

Augmented Reality The Holistic City Kit for Cyberpunk Games was the most interesting to check out as the book attempt to breath life to a cyberpunk urban sprawl through the use of random tables.

While searching the PDF for the words trans, sex and gender I found these results:
Trans identities are relegated to the margins and are mostly sexualized and kind of othered. The book can generate trans sex workers and outrageous transsexual fixers but it won't generate cool transgender agents, gun slingers or slicers or maybe just a trans barista who can serve you a warm cup of soy café and chat about her favorite trid shows. Representation wise this is a let down.

But that said, there is very few cyberpunk themed OSR products and some of these publications don't really present a setting. I hope that more cyberpunk stuff will emerge.

So there is a lot of transploitation in the Cyberpunk genre as trans identities are often used by the genre as a tool to sell a edgy, transgressive and decadent future. In the discussions I had about Cyberpunk 2077 and it big dick MIX IT UP advert, a lot of people told me that this is transploitative but it is on brand for the Mega Corporations. I agree but the issue is that Cyberpunk generally use a straight cis white male gaze to explore the future. Most cyberpunk protagonists are generic cis male characters, "broody Tintins" who are used as point of view characters to give to their audience a familiar perspective that let them explore the weird cyberpunk stuff. These point of view protagonists are not transgender characters who can address how the corporations use their image. If this was the case, maybe it could be something interesting to explore. If not, it is just exploitation.

The main advantage of roleplaying games is that you can author your own character but I appreciate it when the game's writers are able to add some nuanced diversity on their own. Like everyone else, I like it when I find stuff that inspire me in a game or when I can identify with some elements of the setting. 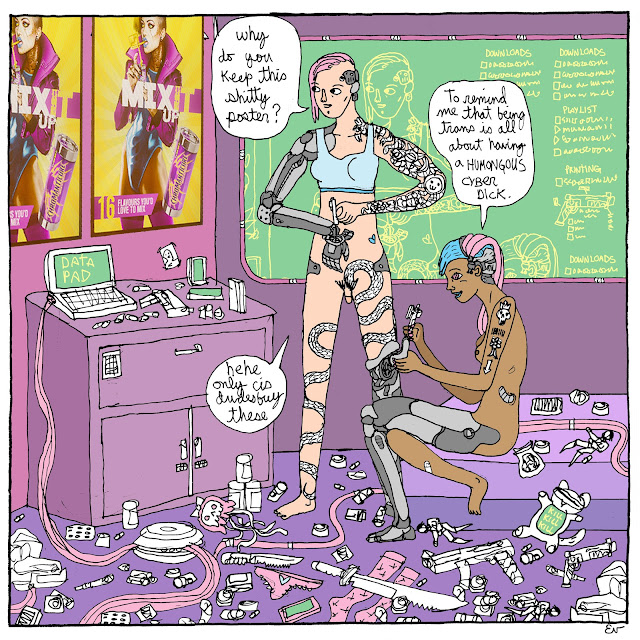 I think the key, as always is to present a good diversity of characters. I want my cyberpunk games to present multiple trans characters, so that some of them can be ordinary trans folks while others can be more marginal people. I want to see cool and flawed cyberpunk characters in the same book. Don't forget that trans people network a lot to find info and to support each other, before, during and after our social and/or physical transition. That gothic trans girl who record porno simsenses certainly know a quiet corporate trans woman, a pre-op net slicer who don't care about their meat body, the cute non binary barista who take a bit of estrogen and that cool street samurai trans man who kick major asses. 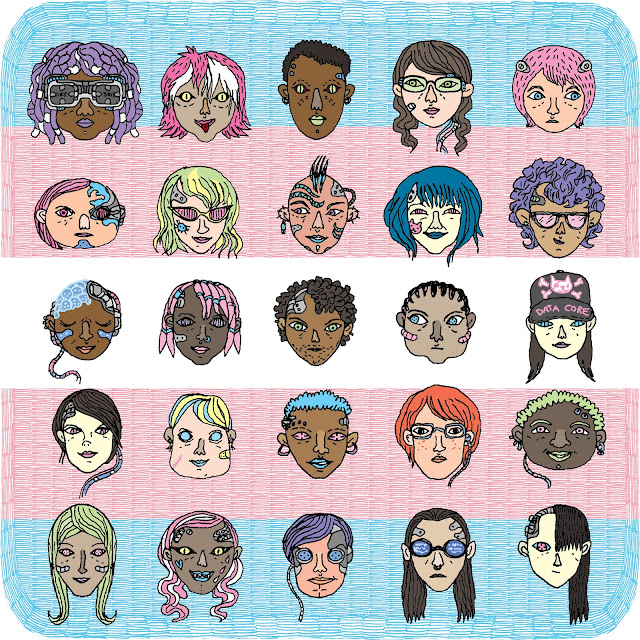 A thought provoking and interesting read . Thank you Evlyn .I wpuld like to hear more about the trans barista and enjoy a soycafe and chat about favourite trid shows

Really interesting thoughts! I'm currently running a game for some friends in my own work-in-progress cyberpunk setting, and three of my players in that game are trans people, with one of them playing an explicitly trans character, and they've been very generous in offering feedback and advice on representation and such, which gone a long way to helping me develop those parts of my setting. I've also been coming up with new gender expressions and sub-identities that have arisen.

Thankyou for this
eclipse phase might be worth a look
in my games i made body characteristic changes so common ppl do it in lunch at the mall via logans run style clinics. Players never really used this possibility.

I agree, Eclipse Phase have many posthuman and transhumanist elements in it settng. But I associate EP more with non-cyberpunk science fiction. I also had to limit myself to OSR games to limit the scope of my research.

As the author of Augmented Reality, I just wanted to apologise sincerely for the marginalisation and othering. This truly was not my intent, and I'm saddened that I have let you and others down. But I fucked up, and I'll own that.

It's likely that in the future I'll be redoing the book (or at least a version of it), so I will address this issue for certain, using this well-written blog piece as guidance. I'll also keep your points in mind for any future projects.

Thank you for writing this article, and sorry again.

Thanks for reading Paul. :) Trans representation aside, I really like what you did with Augmented Reality as a whole. This is the kind of project that I would enjoy crafting myself. It kind of reminded me of Paper Biome. If you do a new edition, I certainly encourage you to work with a trans person or two to get more varied entries (and maybe other folks). I hope that we will see more cyberpunk material emerge from the OSR scene.

I will definitely reach out to a trans person/creator for advice when I revise and redo AR.

Thanks for the very well thought out analysis!
The art made me chuckle.

Exploration of queer identities and cyberpunk feels like it just *fits*, I really wish more properties worked with it. You've given me some great ideas to inject into my personal cyberpunk write up :p

I always thought it was weird that cyberpunk game worlds would let people be stronger, faster, smarter and even prettier through cybernetics and such, but gender reassignment seems to be a blind spot, a bad punchline, or marginalised in some way. I understand dystopia, but I'm pretty sure cyberpunk people should worry more about CyberBob who turned his body into a fine-tuned murder machine, and less about CyberJane who just fixed her gender dysphoria, right?