A Necropolis Ship sail between the material plane and Underworld on the back of a giant undead turtle.

1. Statues of the Underworld Royal Family
2. The ship captain's sarcophagus
3. Priestess cabins
4. Gardian Pole
5. Sarcophagus presented to the Stars
6. Moonlight collectors
7. Sarcophagus of the undead crew
8. Statues of disgraced gods used as evil spirits deflectors
9. Tomb cabins of giant beings
10. Star core
11. Parasitic Starfish God
12. Giant Undead Turtle. A small kobold scribe spends years talking to the turtle just to get out of it the meaning of a single sentence (they live it it helmet).
13. Poor people ties their funerary ships to get a lift to the afterlife 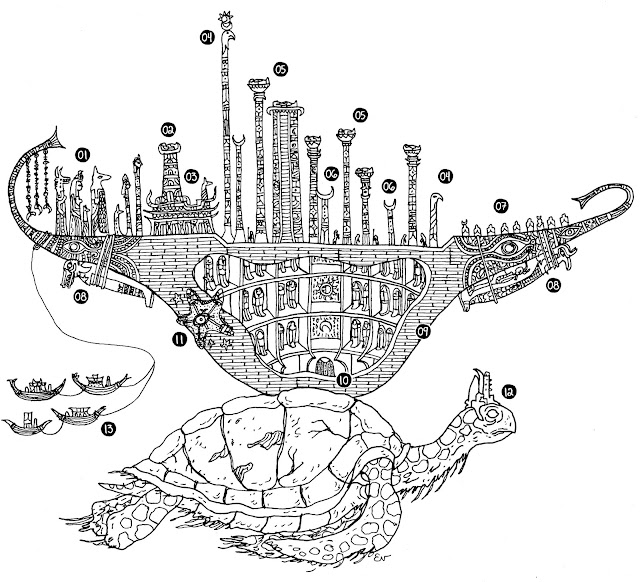 The detail here is excellent!

One of the best things you've ever drawn, and you've drawn a lot of excellent things.

This looks so appealing I forgot that I'd have to die to get on it!

This is wondrous and inspiring.

Very cool! I really like the detail of the drawing and the details of the description, especially the images of disgraced gods as deflectors of evil spirits.