This could be a reskin of the dungeon hacker, using enchanted headphones to listen and record ghostly EVP or a deck jockey class like how Tore N interpreted my illustration:

"The golem was faster than you would have imagined possible. It moved its two-ton bulk like a quicksilver insect. Gragnard the warrior barely had time to put up his shield as another black iron fist descended.
Abigail didn't break a sweat as sparks flew off Gragnag's shield. This was child's play. The golem wasn't even password protected. Abigail typed in a few lines of eldritch code as Eckk the sorcerer's arc lighning bounced harmlessly off the iron guardian.A few tense seconds, then a static hiss and the golem's eyes lost their polished sheen. "SECURITY MEASURE - OFFLINE" a voice like a broken abacus anounced in her headphones. That had been easy. The warlock-king's trap-tomb had been a disappointment so far.

"DEFENSIVE CONTINGENCY SUBROUTINE DETECTED" Abigail felt a coldness in her belly as green gas started seeping from the room's corners. Deck-Mistress Steihn had always chided her for her arrogance." 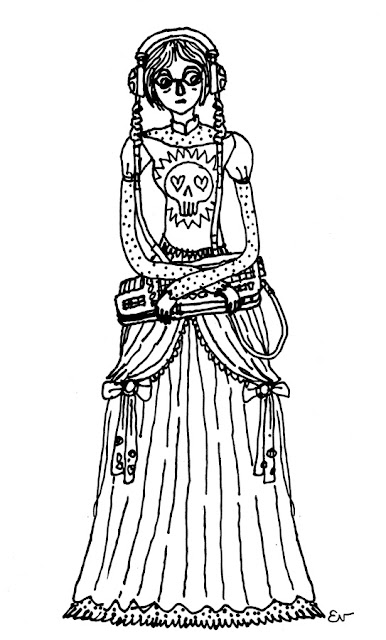