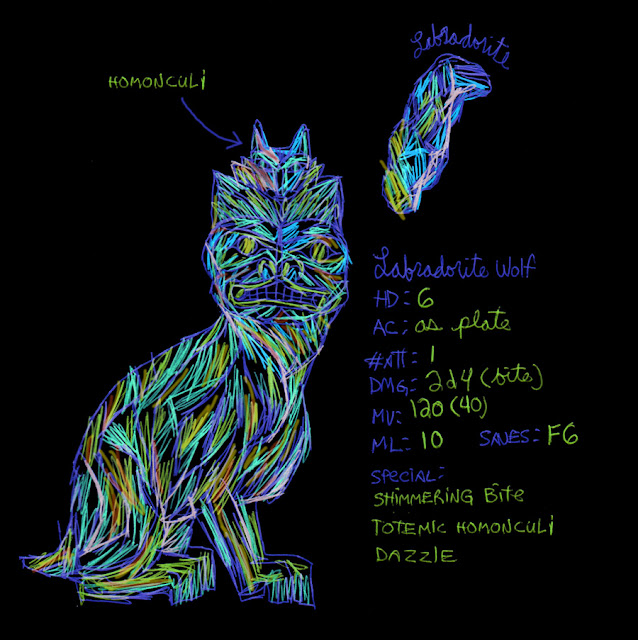 Labradorite wolf are created by forcing a ordinary wolf to eat a labradorite stone sculpted by a sorcerer or by dark or very sad emotions. Eating the stone yourself will get you infected by the lycanthropic labradorescence.

Iridescent lycanthropic labradorescence: your wound start to shimmer (save vs paralysis)
Other symptoms:
Totemic homonculi: each animal homonculi represent a negative emotions locked inside the cursed labradorite stone. The homonculi try to follow and to satisfy the desires of the labradorite wolf, but they are very curious and emotive. They only become agressive after a bad reaction test. Showing positive emotions toward the homonculi grant 1 or 2 point bonus to the reaction tests (making them laugh or caring about them, etc...) On a very good reaction test result, the homonculi shatter and inflict d8+ it own HP in damages to the labradorite wolf. Homonculi spawned by infected wolfs are more primal and wild thant the ones spawned by infected humans.

Some nuns have been infected by the lycanthropic labradorescence in the Glass Dungeon.